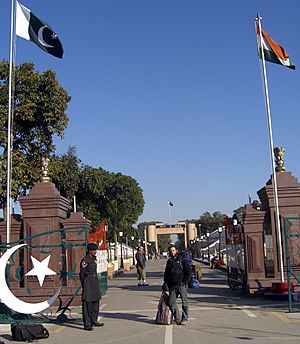 The Hindustan–Pakistan Border, known locally as the International Border (IB), is the international boundary between the Republic of India and Pakistan that demarcates the Indian states of Punjab, Rajasthan and Gujarat from the Pakistani provinces of Punjab and Sindh except for Kashmir that is disputed (Line of Control). The border resulted from the Partition of India in 1947.

Wagah, the ceremonial point of crossing between India and Pakistan lies along this border between the Indian city of Amritsar and the Pakistani city of Lahore.

The border between two countries is called an international border from Gujrat/Sindh to the Line of Control. The Kashmir region is divided by the 1949 UN ceasefire line into two parts and the de facto border dividing Pakistan-administered Kashmir from Indian-administered Kashmir has been called the Line of Control since 1972. On the south side of the border of the Jammu Division is Pakistan's Punjab border, and is called the working boundary by Pakistan (which is a recent term) but the "international border" by India.

All content from Kiddle encyclopedia articles (including the article images and facts) can be freely used under Attribution-ShareAlike license, unless stated otherwise. Cite this article:
India–Pakistan border Facts for Kids. Kiddle Encyclopedia.