Wyborn Reef Light is an active lighthouse located at Wyborn Reef, formerly known as Y Reef, about 16 kilometres (9.9 mi) southeast of Albany Island, east of the tip of Cape York Peninsula, Queensland, Australia. It marks the entrance to the Albany Passage. The lighthouse was constructed in 1938 and upgraded in 1991 and 1995. The structure is a stainless steel tower with a fiberglass hut within the framework, carrying a lantern.

The construction of an automatic lighthouse on Y Reef was approved by the Commonwealth Lighthouse Advisory Committee on 18 August 1937. This caused some confusion since a light was already present at the similarly named Wye Reef, 120 kilometres (75 mi) to the south. The light was eventually constructed by the Public Works Department in late 1938, in difficult conditions. The 14 workers lived in tents on a 50 by 50 feet (15 m × 15 m) wooden platform, 4 feet 6 inches (1.37 m) above tiger shark infested water, with no shelter from the heat. The light was finally exhibited about 10 December of that year. It was automatic and unattended from its construction, and showed a group flashing white light characteristic.

The 1957 Admiralty List of Lights and Fog Signals lists an unmanned white light with a red sector, with a light characteristic of four flashes every twenty second (Fl.(4)W.R. 20s), identical to the current light characteristic. The intensity listed is 3,000 cd for the white light and 1,300 cd for the red one. The light was under the responsibility of the Commonwealth Lighthouse Service.

The light was converted to solar power in 1991 and upgraded in 1995. The remaining pilings from a previous lighthouse are still present next to the current one.

The structure is a stainless steel tower skeletal tower, mounted on concrete piles, 17.5 metres (57 ft) high from the ground to the platform. The platform is topped by a gallery and a NAL-1 fibreglass white painted lantern, bringing the total height of the structure to 21 metres (69 ft). A white machinery fibreglass hut is located inside the tower framework. 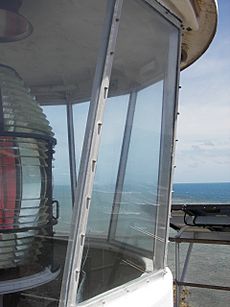 Lantern room at Wyborn Reef Light, showing the lens and the red sector

The lens inside the lantern room is a Chance Brothers 375 mm catadioptric Fresnel lens.

All content from Kiddle encyclopedia articles (including the article images and facts) can be freely used under Attribution-ShareAlike license, unless stated otherwise. Cite this article:
Wyborn Reef Light Facts for Kids. Kiddle Encyclopedia.