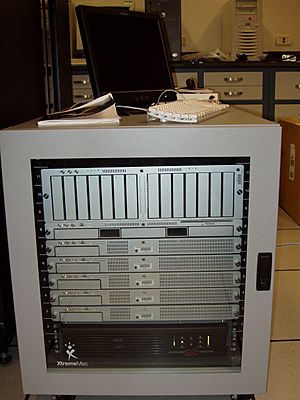 A small Xserve cluster with an Xserve RAID.

The Xserve is a server made by Apple Inc. which started in 2002. It was Apple's first server since the Apple Network Servers that they made in 1996. It first came with one or two PowerPC G4 processors. Later, new PowerPC G5 were added. Now, the server runs on two quad-core Intel Nehalem CPUs.

The Xserve can be used for many things, such as a file server and web server. It can even be used for high-performance computing applications using clustering—a dedicated cluster Xserve, the Xserve Cluster Node. This means there are many Xserves linked together so they can combine their power. For this, it was available without a video card or optical drive.

All content from Kiddle encyclopedia articles (including the article images and facts) can be freely used under Attribution-ShareAlike license, unless stated otherwise. Cite this article:
Xserve Facts for Kids. Kiddle Encyclopedia.