Yaquina Head (/jəˈkwɪnə/ yə-KWIN-ə) is a headland extending into the Pacific Ocean north of Newport, in the U.S. state of Oregon. It is the site of the Yaquina Head Light, and is managed as Yaquina Head Outstanding Natural Area by the Bureau of Land Management. It is part of the National Landscape Conservation System, commonly known as the National Conservation Lands.

Possible activities include hiking the area's five trails, each shorter than 0.5 miles (0.8 km), near the ocean or through forests of Douglas fir and Sitka spruce. Other attractions include whale-watching, bird-watching, visiting the site's interpretive center, and touring the lighthouse. 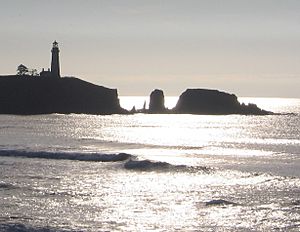 Yaquina Head from the north

All content from Kiddle encyclopedia articles (including the article images and facts) can be freely used under Attribution-ShareAlike license, unless stated otherwise. Cite this article:
Yaquina Head Facts for Kids. Kiddle Encyclopedia.