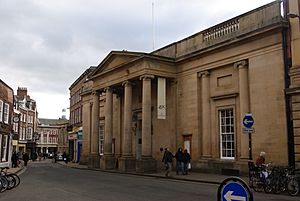 The York Assembly Rooms is an 18th-century assembly rooms building in York, England, originally used as a place for high class social gatherings in the city.

The building is situated on Blake Street and is a Grade I listed building. It was designed by Lord Burlington and is one of the earliest Palladian buildings in Northern England.

It currently operates as an Ask Italian.

All content from Kiddle encyclopedia articles (including the article images and facts) can be freely used under Attribution-ShareAlike license, unless stated otherwise. Cite this article:
York Assembly Rooms Facts for Kids. Kiddle Encyclopedia.