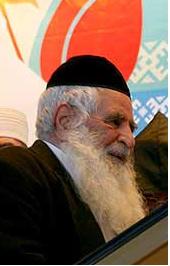 Yosef Hamadani Cohen (Persian: یوسف همدانی کهن; born 1916 – 29 March 2014) was an Iranian Jewish religious leader. He was the chief rabbi of the Jewish people in Iran from January 1994 until his death. Before this, he was the rabbi of Yusef Abad Synagogue.

All content from Kiddle encyclopedia articles (including the article images and facts) can be freely used under Attribution-ShareAlike license, unless stated otherwise. Cite this article:
Yosef Hamadani Cohen Facts for Kids. Kiddle Encyclopedia.