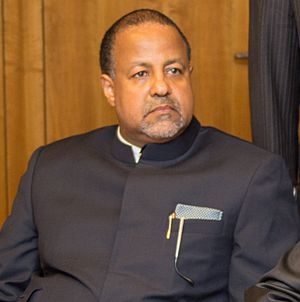 Yusuf Mohamed Ismail (Somali: Yuusuf Maxamed Ismaaciil Baribari, Arabic: يوسف محمد إسماعيل‎; 11 September 1960 – 27 March 2015), also known as Bari-Bari, was a Somali politician and diplomat. He joined diplomatic services in 2007. At the time of his death, he was the Ambassador to Switzerland and the Permanent Representative to the United Nations in Geneva since 4 April 2008.

Ismail was born in Bologna, Italy to an aristocratic Somali Muslim family. He studied at the University of Bologna. He was married and had children.

On 27 March 2015, Ismail was injured in an attack by al-Shabaab militants at the Makka al-Mukarama hotel in Mogadishu while attending a conference. He later died from his injuries in hospital, aged 54. He was buried in Garoowe, Puntland on 29 March.

All content from Kiddle encyclopedia articles (including the article images and facts) can be freely used under Attribution-ShareAlike license, unless stated otherwise. Cite this article:
Yusuf Mohamed Ismail Facts for Kids. Kiddle Encyclopedia.