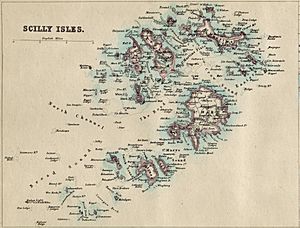 Map of Isles of Scilly
Zantman's Rock near left margin

The name "Zantman's Rock" is recorded on an Admiralty chart of 1860: before then, it appears not to have been distinguished from the Crim Rocks a short distance to the southwest. Several legends attempt to explain the name of the rock, one of which involves a Dutchman being shipwrecked and finding himself in the unlikely position of clinging on to the rock.

Zantman's Rock has been the cause of at least one famous shipwreck: that of the Susanna, on 14 August 1913. The wreckage still lies on the southwestern side of Zantman's Rock.

All content from Kiddle encyclopedia articles (including the article images and facts) can be freely used under Attribution-ShareAlike license, unless stated otherwise. Cite this article:
Zantman's Rock Facts for Kids. Kiddle Encyclopedia.