The Bishop Rock (Cornish: Men Epskop) is a skerry off the British coast in the northern Atlantic Ocean known for its lighthouse. It is in the westernmost part of the Isles of Scilly, an archipelago 45 km (28 mi) off the southwestern tip of the Cornish peninsula of Great Britain. The Guinness Book of Records lists it as the world's smallest island with a building on it.

The original iron lighthouse was begun in 1847 but was washed away before it could be completed. The present building was completed in 1858 and was first lit on 1 September that year. Before the installation of the helipad, visitors to the lighthouse would rappel from the top (with winches installed at the lamp level and at the base below) to boats waiting away from the lighthouse.

Bishop Rock is also at the eastern end of the North Atlantic shipping route used by ocean liners in the first half of the 20th century; the western end being the entrance to Lower New York Bay. This was the route that ocean liners took when competing for the Transatlantic speed record, known as the Blue Riband.

In the late 13th century, when the Isles of Scilly were under the jurisdiction of John de Allet and his wife Isabella, anyone convicted of felony "ought to be taken to a certain rock in the sea, with two barley loaves and a pitcher of water and left until the sea swallowed him up". The rock was originally recorded as Maen Escop in 1284 and Maenenescop in 1302. In Cornish, Men Eskop means "Bishop's Stone", whilst Men an Eskop means "the Stone of the Bishop". The outer rocks to the west of St Agnes also used to be known as the Bishop and Clerk, but exactly how they acquired these similar names is not known for certain. A possible explanation is that the shape of the rock is similar to a bishop's mitre.

East of Bishop Rock are the Western Rocks and the Gilstone Reef, where Admiral Shovell's flagship HMS Association was wrecked in the great naval disaster of 1707. Shovell's remains were repatriated to England by order of Queen Anne shortly after their initial burial in the Isles of Scilly.

The earliest recorded wreck on the rock itself was in 1839, when the brig Theodorick struck in rough misty weather on 4 September. She was out of Mogodore for London carrying a general cargo. In the early hours of 12 October 1842, the 600-tonne paddle steamer Brigand, a packet boat, which was en route from Liverpool to St Petersburg, struck the rock with such force that it stove in two large bow plates. The rocks then acted as a pivot, and she swung round and heeled into the rock port side, crushing the paddle-wheel and box to such an extent that it penetrated the engine room. She drifted over seven miles in two hours, before sinking in 90 m. All the crew were saved. In 1901 a barque named Falkland struck the rock, her main yard hitting the lighthouse itself. 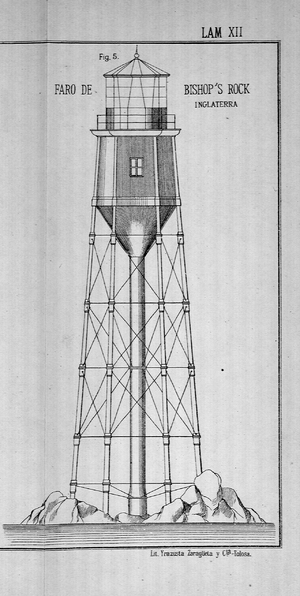 Bishop Rock screw-pile first lighthouse according to a drawing by José Eugenio Ribera.

An 1818 report by the Surveyor–General of the Duchy of Cornwall on the dangers to shipping in Cornwall proposed that a lighthouse be built, similar to the Eddystone Lighthouse, upon Bishop Rock, given its location as the westernmost rock of the Isles of Scilly. The plan was considered by the government and building was expected soon, as the engineer John Rennie the Elder made an offer to build it. The government did not take up the offer, but Trinity House surveyed Bishop Rock in 1843, with a view to building a lighthouse, and work began in 1847. The engineer in chief, James Walker, decided on a 120-foot-tall (37 m) design consisting of accommodation and a light on top of iron legs. The light was never lit, since on 5 February 1850 a storm washed the tower away.

In the second attempt, James Walker began building a stone structure in 1851. The site presented a number of difficulties: the paucity of available land area and the slope of the rock meant that the lowest stone had to be laid below the low water level of the lowest spring tides. The resident engineer was Nicholas Douglass assisted by first James and then William, his son. Despite multiple problems, the tower was completed without loss of life. It was fitted with a large (first order) fixed catadioptric optic by Henry Lépaute, and shone its light for the first time on 1 September 1858. The total cost of the lighthouse was £34,559.

Faced with the full force of the Atlantic, however, the building proved vulnerable: in heavy weather the tower regularly shook, the vibrations being powerful enough to cause objects to fall from shelves, and even causing the optical apparatus to fracture. The lighthouse had initially been provided with a 3 cwt fog bell; however this was washed away during a storm in January 1860. (It was replaced with a larger bell, but not until 1864; the bell was sounded once every ten seconds).

In 1881, various other expediencies having been tried in the meantime, Sir James N. Douglass inspected the tower and designed a renovation to reinforce the structure by laying massive granite blocks into the rock and dove-tailing them onto the lighthouse. The renovations increased its height by 40 feet (12 m). The work began in 1882 and completed in 1887, under the supervision of Douglass's eldest surviving son, William Tregarthen Douglass.

The new improved light had a range of 181⁄4 nautical miles. The optic was designed and built by Chance Brothers and was 'biform' (having two identical lamps and lens arrays, one mounted above the other). Each tier consisted of an eight-wick paraffin burner set within a revolving array of extra large hyperradiant Fresnel lenses (consisting, on each level, of five pairs of lens panels, displaying two white flashes every minute). In clear weather the lower tier alone was used, with its lamp on half power; in limited visibility (as judged by the clarity of the light visible from St Agnes's Lighthouse, 5 nmi (9.3 km; 5.8 mi) away) both tiers were used with the lamps at full power.

The heavy optic was turned by a small air engine placed in the pedestal; compressed air was provided from a set of tanks, located in the room below along with a pair of Davey 'Safety' Engines, which drove the compressors. The compressed air could also be used, by day, to drive a small gallery-mounted winch for landing stores.

As part of the renovation, the lighthouse was equipped with an explosive fog signal: in foggy weather the keepers regularly had to attach a guncotton charge together with a detonator to a jib-type apparatus on the lantern gallery; from inside the lantern they would then raise the jib and fire the charge electrically. The explosive signal remained in use until 1976.

The paraffin lamps remained in service until 1973, when the light was converted to electricity. Difficulty reaching the lighthouse by boat led Trinity House to build a helipad on top of the lighthouse in 1976. That same year a supertyfon fog horn was installed with sounders arranged around the gallery.

On 15 December 1992 the tower became fully automated; the lower half of the biform optic remains in use but following automation the top half was removed and put on display (it is currently in the National Maritime Museum Cornwall). An electric fog signal replaced the supertyfon at this time, sounding a long followed by a short tone every 90 seconds; its use was discontinued in 2007.

On the 144th anniversary of the destruction of James Walker's original iron tower (5 February 1994), a storm caused severe damage to the gunmetal entry doors, which had to be replaced; they too became an exhibit at the National Maritime Museum in Falmouth.

The interior of the light house consists of the following: Below and inside the lighthouse are 10 floors with spiral staircase to the 2nd floor with a door (made from gun metal (likely bronze) and installed in 1887) that leads down an external metal (likely bronze) ladder to climb down to the large exterior base. From the base another metal ladder provides access to a stone staircase to the waterline.

The floors of the lighthouse are occupied as follows:

The rock is the subject of a short orchestral descriptive work by the late Doreen Carwithen (Mary Alwyn), which has been recorded by the London Symphony Orchestra under the baton of Richard Hickox.

The lighthouse featured in BBC TV children's programme Blue Peter in 1975, when presenter Lesley Judd visited. "Disaster nearly struck as she travelled by rope to the lighthouse from a boat. Her harness snapped, leaving Lesley with no support should she lose her grip on the rope."

The lighthouse also features in the novel Stone In The Blood by Colin Jordan and David England, and in the short story "Keeper of the Bishop" by A E W Mason.

All content from Kiddle encyclopedia articles (including the article images and facts) can be freely used under Attribution-ShareAlike license, unless stated otherwise. Cite this article:
Bishop Rock, Isles of Scilly Facts for Kids. Kiddle Encyclopedia.