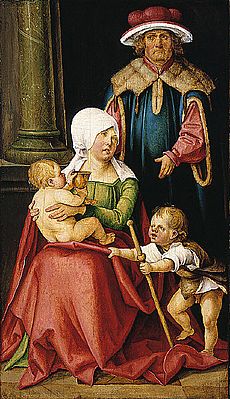 Hans von Kulmbach, Mary Salome and Zebedee with their Sons James the Greater and John the Evangelist, c. 1511

Zebedee was a fisherman from Galilee who was the father of James and John who were disciples (followers) of Jesus. A story in the Gospel of Matthew and the Gospel of Mark says he was in a boat with his two sons when Jesus called them to follow him. He stayed in the boat with other men who worked for him. This could mean he was rich enough to hire others to help in his fishing work. The two sons were also fishermen when Jesus called them. Other than this short report, not much can be known for sure about Zebedee.

All content from Kiddle encyclopedia articles (including the article images and facts) can be freely used under Attribution-ShareAlike license, unless stated otherwise. Cite this article:
Zebedee Facts for Kids. Kiddle Encyclopedia.