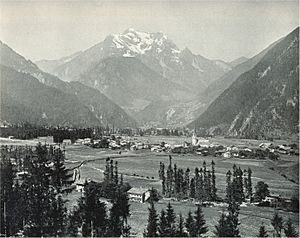 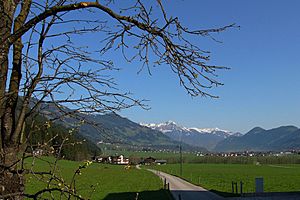 The Zillertal is the biggest valley branching off the Inntal in Tyrol, Austria drained by the river Ziller. It is surrounded by the strongly glaciated Zillertaler Alpen to the south and east, the lower grass peaks of the Kitzbüheler Alpen to the east and Tuxer Alpen to the west. The largest settlement is Mayrhofen.

The Zillertal is particularly renowned for its musical tradition. For instance, several families of travelling singers and organ builders from the valley have been credited with spreading the Christmas carol Silent Night across the world during the 19th and early 20th centuries. More recently, the Schürzenjäger band have had tremendous success in German-speaking countries with their crossover mix of Volksmusik and pop.

All content from Kiddle encyclopedia articles (including the article images and facts) can be freely used under Attribution-ShareAlike license, unless stated otherwise. Cite this article:
Zillertal Facts for Kids. Kiddle Encyclopedia.