140 West 57th Street, also known as The Beaufort, is an office building on 57th Street between Sixth Avenue and Seventh Avenue in Midtown Manhattan in New York City. It was built from 1907 to 1909 and designed by Pollard and Steinam, who also simultaneously designed the neighboring, nearly identical building at 130 West 57th Street. The buildings are among several in Manhattan that were built in the early 20th century as both studio and residences for artists.

140 West 57th Street was designed by Pollard and Steinam, who also designed the neighboring studios at 130 West 57th Street. Both structures were constructed simultaneously and were designed nearly identically as studio apartments for artists. 140 West 57th Street is 150 feet (46 m) tall; the front portion along 57th Street contains 14 stories while the rear portion contains 12 stories. The building has also historically been known as The Beaufort. It is one of a few remaining artists' studio buildings in New York City with distinct living and working spaces for artists.

The main facade overlooking 57th Street consists of five vertical bays, which contain metal windows and are separated by brick piers. The westernmost, center, and easternmost bays are wider, and alternate with two narrower bays. The rear facade is made of brick.

The base is composed of the first and second stories. At the base, the central bay contains a slightly projecting entrance pavilion clad with rusticated and vermiculated limestone blocks. Within this entrance pavilion is an arch with voussoirs flanking a volute above the top of the arch, and a double door flanked by a pair of flat pilasters. The remainder of the base contains storefronts or store entrances on the first story. The second story contains multi-section rectangular windows in the wide bays and pairs of sash windows in the narrow bays. Atop the second story is a projecting terracotta cornice, which contains a frieze with alternating circles and triglyphs, as well as a pattern of mutules alternating with rosettes or lozenges on the underside of the cornice. 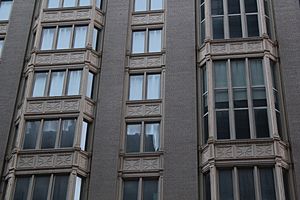 Close up of facade, showing the western three bays

The twelve upper stories are similar in design to each other and contain several types of windows. The windows in the outermost wide bays, and on the third through tenth stories of the center bay, project slightly from the facade and contain trapezoidal frames. The outermost bays contain double-height windows. These double-height windows were designed to maximize sun exposure. The windows in the narrow bays, and in the eleventh through fourteenth stories of the center bay, do not project. In all bays, there are geometric white-painted spandrels between the windows on each story, and the windows have white mullions. The original design contained a metal cornice above the fourteenth story, matching that of 130 West 57th Street, but the cornice was removed sometime in the 20th century.

The building was designed with 36 studios. Its location on the south side of 57th Street, a major road that was wider than parallel streets, ensured that the interiors would be brightly lit by sunlight from the north, for the benefit of the artists working there. The interiors contained double-height studios, characterized by House Beautiful magazine as "a splendid backdrop for tapestry or painting". The double-height studios were behind the wide bays facing 57th Street, and each contained a living room, kitchen, four bedrooms, and servants' rooms. Behind the narrow bays were studio rooms, some of which could be used as separate apartments. There were smaller apartments in the rear, which contained two bedrooms and a kitchenette. The building had separate elevators for passengers and freight, as well as resident amenities such as a vacuum cleaning facility, a laundry room, a mail chute, dumbwaiters, and telephone service in each residence.

140 West 57th Street was altered in 1998 and reclassified as a mid-rise office building with commercial units. According to the Department of City Planning, the building has a gross floor area of 90,000 square feet (8,400 m2) and has a single unit. Renovation plans released in 2020 indicate that the building is to be converted into commercial units, with two per floor.

Cooperative apartment housing in New York City became popular in the late 19th century because of overcrowded housing conditions in the city's dense urban areas. When 140 West 57th Street was constructed, there were some co-ops in the city that catered specifically to artists, including the Bryant Park Studios and the Carnegie Studios, but these were almost always fully occupied and did not provide adequate space for artists to both live and work. The 67th Street Studios, constructed between 1901 and 1903 at 23–29 West 67th Street near Central Park, were the first artists' cooperatives in the city that were also specifically designed to provide duplex working and living areas for artists. The success of the 67th Street Studios prompted the development of other artists' studios in that area. 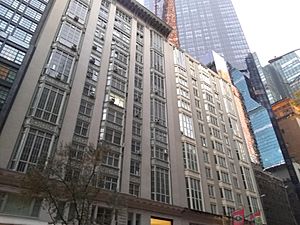 Robert Vonnoh, an artist residing in one of the 67th Street Studios, bought four brownstone townhouses at 134–142 West 57th Street in mid-1907. Ownership of the brownstones was transferred to the 136 West 57th Street Corporation that August. The corporation was operated by president Walter G. Merritt and secretary Payson McL. Merrill. Pollard and Steinam were hired to design a $500,000 apartment house at the site, with seven double-height stories in the front and twelve single-height stories in the rear. The architects had also been hired for the nearly identical, adjacent development at 130 West 57th Street, developed by the same individuals. Building permits for 140 West 57th Street were filed with the New York City Department of Buildings in December 1907. The construction contract was awarded to William J. Taylor, and funded with a $475,000 loan from the Metropolitan Life Insurance Company. The building was completed in January 1909.

Although marketed as artists' studios, 140 West 57th Street was also home to lawyers, stock brokers, teachers, and other professionals. The tenants included opera singer Beniamino Gigli, as well as sculptor and forger Ernest Durig. The building originally had an entrance staircase, but it was removed in 1922 as part of a project to widen West 57th Street. Sometime during the 20th century, the original cornice was removed and the ground story storefronts were installed.

The building was converted to a rental apartment in 1944. The Dry Dock Savings Institution sold the building to an investment syndicate for $335,000 cash in January 1945. The building was resold to the Parkbridge Corporation in late April 1945, and resold again within one week. At the time, 140 West 57th Street had 68 residential units and two stores.

The Planet Hollywood at the building's base had closed by late 2000, when the restaurant moved to Times Square. During the early 21st century, office tenants included a consultant group, a violin reseller, a triathlon athletes' specialty company, and a jewelry showroom. By 2008, Macklowe was in debt and placed 140 West 57th Street for sale; The Feil Organization purchased 140 West 57th Street the next year for $59 million. In 2015, Feil hired Goldstein Hill & West to conduct a study on the feasibility of converting the building back to residential use, and the architects found that the building could be expanded by about 11,000 square feet (1,000 m2). Feil stopped renewing leases for 140 West 57th Street's office plans in early 2016, and Goldstein Hill & West filed plans that November to convert the building to 34 residential condominiums. After Feil found that the air-rights transfer in 1984 prevented the expansion of the building, the company sued Goldstein Hill & West. MdeAs Architects submitted revised plans to the LPC in July 2020, which entailed modifying the facade, reinstalling the cornice, expanding the 13th story at the rear, and converting the interior to a commercial structure.

All content from Kiddle encyclopedia articles (including the article images and facts) can be freely used under Attribution-ShareAlike license, unless stated otherwise. Cite this article:
140 West 57th Street Facts for Kids. Kiddle Encyclopedia.