The 1998 Papua New Guinea earthquake occurred on July 17 with a moment magnitude of 7.0 and a maximum Mercalli intensity of VIII (Severe). The event occurred on a reverse fault near the north coast region of Papua New Guinea, 25 kilometers (16 mi) from the coast near Aitape, and caused a large undersea landslide which caused a tsunami that hit the coast, killing between at least 2,183 and 2,700 people and injuring thousands.

The earthquake occurred at 6:49pm local time (UTC+10) along the boundary of the Australia and the Pacific tectonic plates. The tsunami was originally thought to have been caused by a 2 m (6 ft 7 in) vertical drop in the Pacific Plate along a 25 mi (40 km) long fault. Later work suggested that in fact a massive underwater landslide had occurred.

The tsunami raised awareness among scientists of the potential for small earthquakes to trigger large tsunamis, if they cause undersea landslides. It is now recognised that such events can be very dangerous, as the earthquake may be too small to be felt on land, or detected by the Pacific Tsunami Warning Center. Any resulting tsunami can thus appear without warning.

The earthquake consisted of a main shock and several aftershocks that were felt in several towns in the area around the epicenter. The main shock caused some minor damage to the 62-year-old church at the Sissano Mission, and was strong enough that many people in Malol, Arop, and Warapu left their houses because the shaking lasted for so long. Cracks in the ground formed in Arop and Warapu. 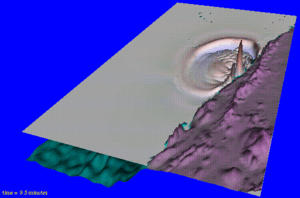 Computer modelling of the earthquake and resulting landslide

A few minutes after the earthquake, many residents reported hearing a loud clap as the tsunami approached the shoreline. The tsunami resulted in at least 2,200 people being killed, thousands being injured, about 9,500 homeless and about 500 missing. The maximum height of the waves was estimated at being 15 m (49 ft) high with an average height of 10.5 m (34 ft).

The area worst hit was a 30 km (19 mi) coastal strip running north-west from Aitape to the village of Sissano. Several villages in the path of the tsunami were completely destroyed and others extensively damaged. The tsunami wave uprooted entire buildings and transported their foundations 50–60 metres (160–200 ft) from their original location The village of Arop was situated on a narrow spit between the coast and Sissano Lagoon. It was directly in the path of the tsunami and was worst hit.

All content from Kiddle encyclopedia articles (including the article images and facts) can be freely used under Attribution-ShareAlike license, unless stated otherwise. Cite this article:
1998 Papua New Guinea earthquake Facts for Kids. Kiddle Encyclopedia.