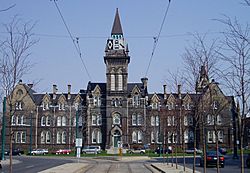 1 Spadina Crescent, Toronto, Canada. The new north side is not visible.

1 Spadina Crescent, also known as the Daniels Building, is an academic building home to the John H. Daniels Faculty of Architecture, Landscape, and Design at the University of Toronto (U of T) in Toronto, Ontario, Canada. The building is situated in the centre of a roundabout of Spadina Avenue, north of College Street. Its location provides a picturesque vista looking north up Spadina Avenue; it is an axial view terminus for Spadina Avenue.

The parcel of land now known as Spadina Crescent first appeared on maps of Toronto as early as 1835, originally named "Mansfield's Old Gardens" and then Crescent Garden. The land was originally laid out by Dr. William Baldwin to cut through his family's land holdings. There was the intention for the city to turn it into a park after Dr. Baldwin's death; however, the conditions for this were never met and his grandchildren sold the land in 1873 to the Hon. J. McMurrich of the Presbyterian Church for $10,000. 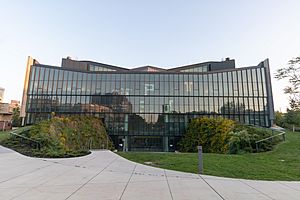 North side of 1 Spadina Crescent

A Gothic Revival building designed by architect James Avon Smith was built in 1875 as the then new home of Knox College, a theological college of the Presbyterian Church in Canada. Knox College became affiliated with the University of Toronto in 1887, and in 1914 moved to its current location on the west side of King's College Circle. During World War I, the building became barracks, and shortly afterward became the Spadina Military Hospital in October 1916. For a period in 1918, Amelia Earhart worked as a nurses aide at the hospital. It remained a veterans hospital until 1943 when it was acquired by the University of Toronto's Connaught Medical Research Laboratories, which became one of Canada's main centers for the development and manufacture of pharmaceuticals. The building was in disrepair at this point and needed substantial renovations. It was also around this time that the basement was excavated. In the 1960s, it was proposed that this building be demolished to make way for the Spadina Expressway, which was never built. It became an academic building again in 1972 with the sale and relocation of the laboratories. The building was home to the Ontario division of the Eye Bank of Canada, and an alternative U of T student weekly newspaper, The Newspaper which moved because of renovations. 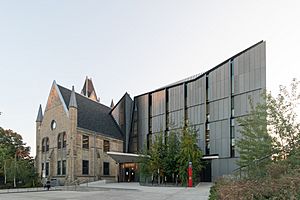 The east side of 1 Spadina Crescent shows both the new addition and the old building.

In June 2013, U of T announced a significant overhaul and renovation of the building, with plans to make it the new home for the Daniels Faculty of Architecture. On December 4, 2015, the Toronto Star published a video by Christopher Hume, its architecture critic, celebrating the building's history, and the University's plan to renovate, update and expand the building. The building was subsequently restored and renovated by a team of architects including heritage architects ERA and design architects Nader Tehrani and Katherine Faulkner of the Boston based firm NADAAA. The expansion, which was completed in 2017, included a new contemporary glass, concrete, and steel addition to the north side. The expanded portion of the building now offers space for design studios, lounges, a student cafe, workshop and fabrication labs. The historic building was sensitively restored and renovated to accommodate the new library, classes, and faculty offices. Toronto based landscape architecture studio PUBLIC WORK designed the surrounding landscape, which includes native plants and trees such as birch and oak. On the north side are two large berms, a grassy area, and a stepped pathway which leads to the fabrication laboratory. The extensive project received several awards for architectural excellence and was published in magazines around the globe.

Formerly the site of the Knox College courtyard, The Main Hall is a double-height lecture hall with bleacher-style seating for lectures, performances, and events of up to 400 people. The hall is at the heart of building, accessible via both the historic part of the building at the south side, and via the new east-west internal "street"/corridor in the new building. In 2018, the hall hosted Pritzker Architecture Prize winner Balkrishna Doshi's public lecture about his work and the prize. The hall is adorned with colourful painted plywood walls that add a sense of energy and movement to the space. Above, “a triangular section of stepped seating, like an open stair outside the volume between the second and third floors, overlooks the hall and simultaneously connects to the design studio for graduate students at the top.”

The third-floor graduate design studio is known for its expansive “column-free” space that extends across the entire North side of the building and offers views of the city through a glazed curtain wall. NADAAA architects used gypsum boards to design a dramatic “bow-tie” ceiling made of four scissor trusses and clerestory ceiling openings that bring in natural light. Architect Nader Tehrani was inspired by the Firth of Forth Bridge in Scotland.

The fabrication lab is a double-height workshop and digital laboratory which “offers a variety of computationally controlled technologies, including large 3-axis and 4-axis routers, a fused deposition modelling rapid-prototyping system, a waterjet cutter, a colour 3D printer, a 3D digitizer, a 3D laser scanner, several laser cutters, and a large format vacuum former.” The array of digital tools allow students at the faculty to produce models and various structural elements in wood and metals. The lab is viewable to students and visitors at the building from the east-west “street” that runs through the centre of the building. Double-height garage style doors open to a landscaped courtyard. Adjacent to the lab is the Daniels construction workshop which includes a full metal and woodworking shop, an assembly space, spray booth, and a large array of materials and tools.

The Architecture and Design Gallery is an experimental public gallery dedicated to showcasing and advocating for the important ways that design shapes our cities, landscapes, and daily lives. Located in the lower level of the building, it was renovated from a "concrete shell" into a 7,500 s.f. exhibition venue after the new building opened in 2017. The space launched on November 9, 2019, with the opening of the inaugural installation New Circadia. The gallery is supported by the Estate of James Drewry Stewart and the Government of Canada.

Architect’s Newspaper Best of Design Awards Winner in Educational Category and Honorable Mention for Building of the Year, 2018

All content from Kiddle encyclopedia articles (including the article images and facts) can be freely used under Attribution-ShareAlike license, unless stated otherwise. Cite this article:
1 Spadina Crescent Facts for Kids. Kiddle Encyclopedia.