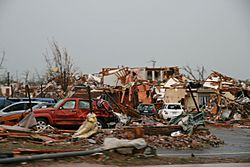 Damage from the tornado

The 2011 Joplin tornado was a very violent EF5 tornado that hit Joplin, Missouri on the afternoon of May 22, 2011. It had winds of over 200 miles per hour. It killed 158 people and hurt 1,150 others. It caused $2.8 billion in damage. It is the costliest tornado to hit the United States. It was the third tornado to hit Joplin since May 1971.

All content from Kiddle encyclopedia articles (including the article images and facts) can be freely used under Attribution-ShareAlike license, unless stated otherwise. Cite this article:
2011 Joplin tornado Facts for Kids. Kiddle Encyclopedia.