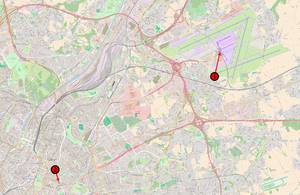 Map of Brussels, showing the location of the two bombs

On 22 March 2016, three large explosions happened in the Belgian capital Brussels. Two bombs exploded at Brussels Zaventem Airport and one exploded at Maalbeek metro station. According to the Belgian Health Ministry, there have been at least 31 confirmed deaths and over 250 reported injuries. Islamic State of Iraq and the Levant (ISIL) has publicly claimed responsibility for the attack. There are three suspects.

All content from Kiddle encyclopedia articles (including the article images and facts) can be freely used under Attribution-ShareAlike license, unless stated otherwise. Cite this article:
2016 Brussels bombings Facts for Kids. Kiddle Encyclopedia.