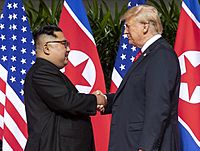 The White House confirmed the meeting between President Donald Trump and Chairman Kim Jong-un on 8 March 2018. This was the first time that a sitting U.S. president met the leader of North Korea since the Korean War.

White House Press Secretary Sarah Huckabee Sanders said that "in the meantime, all sanctions and maximum pressure must remain."

Kim talked about preparations for the meeting in remarks to the Politburo of the Workers' Party of Korea on April 9.

On May 10, Trump announced that the summit will be held on June 12, 2018 in Singapore. It was announced after the release of 3 American hostages by North Korea.

All content from Kiddle encyclopedia articles (including the article images and facts) can be freely used under Attribution-ShareAlike license, unless stated otherwise. Cite this article:
2018 North Korea–United States summit Facts for Kids. Kiddle Encyclopedia.