21 West Street, also known as Le Rivage Apartments, is a 33-story building located in the Financial District of Lower Manhattan in New York City, on Morris Street between West Street and Washington Street. It was built in 1929–1931 as a speculative office tower development in anticipation of an increased demand for office space in Lower Manhattan. The building was converted into apartments in 1997 and was renamed Le Rivage.

The building has an Art Deco design with many lavish architectural finishes and a series of setbacks which taper toward the top floors. It was designed by Starrett & van Vleck, who at the same time designed the adjacent Downtown Athletic Club. 21 West Street was listed on the National Register of Historic Places in 1999 and designated a city landmark by the New York City Landmarks Preservation Commission in 1998.

The building stands on filled land along the shore of the North River (an archaic name for the southernmost portion of the Hudson River). The surrounding neighborhood, the Financial District, was the first part of Manhattan to be developed as part of New Netherland and later New York City; its population growth led city officials to add land on Manhattan's shore by filling and land reclamation in the 18th and 19th centuries. As the North River shoreline was deeper and had a denser concentration of buildings than the East River shoreline on the east side of Manhattan Island, the land under 21 West Street was not filled until 1835, when debris from the Great Fire of New York was dumped there. As a result of the land filling, 21 West Street was constructed without a basement, which was "a decidedly rare feature" in New York City buildings, hence the need to import steam and electricity. The site of 21 West Street was first occupied by small landowners who built houses in the area. The surrounding neighborhood became a financial and shipping hub during the late 19th century; as the Financial District became more densely developed, the residential landowners moved uptown and their former lands were combined to build larger commercial buildings. 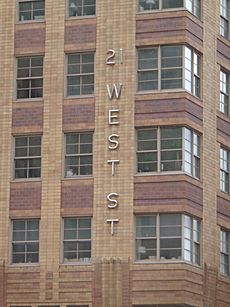 The building has a ground-story arcade which overhangs much of the Morris Street sidewalk, giving the impression that pedestrians have been transported inside the building. There are numerous storefronts beneath the arcade, as well as the entrance to the building's lobby.

As mandated by the 1916 Zoning Resolution, the design of 21 West Street features six setbacks, creating the impression that the building tapers off as it ascends. The setbacks are located on Washington Street above the 10th and 16th floors, at the northwest and northeast corners above the 21st floor, and on all sides above the 26th, 29th, and 30th floors.

The facade of 21 West Street was designed with molded and oversized brick "to emphasize the structural lines and to enrich the texture of the materials". Brick and terracotta were used in red, orange, and yellow tones, a design feature influenced by Harvey Wiley Corbett's plan for the Master Apartments in the Upper West Side of Manhattan. For instance, the light-tan vertical piers highlight the building's vertical dimension, while other brick patterns give the impression of a "skin", including the horizontal lines of the spandrels between the floors. At each setback and on the three lower levels, the parapets have various designs of molded brick to provide surface texture to the building's exterior. The southern facade is hidden behind the Downtown Athletic Club building to the south.

The corners of the building were outfitted with windows wrapping around the edge at a 90-degree angle, instead of structural columns as had been provided in previous buildings, making 21 West Street possibly the first commercial building in the U.S. to have wrap-around corner windows. Prior to the construction of 21 West Street, corner windows had only been used on residential structures. 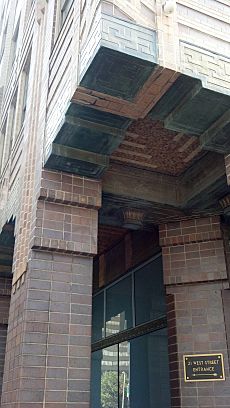 Underside of one of the corners, facing the arcade
on Morris Street

Despite its address, 21 West Street's primary entrance is at the center of the Morris Street facade, beneath the one-story arcade, which includes ten bays at ground level on this side of the building and has multicolored mosaics on its ceiling. The arcade, storefronts, and main entrance contain decorative metalworks painted in silver and gold tones, which extend into the interior, described by the National Park Service as "an unusual design feature". The piers and interior walls of the arcade are outfitted with bronze panels and lighting installations. The arcade's arches mostly consist of stepped brick, except for the fifth bay from Washington Street, which is a square marble-framed arch that leads to the main entrance. The spandrels above the arcade are textured in a chevron (V-shaped) design with tan and purple brick. The arcade continues in reduced form on the West and Washington Street facades, each being five bays wide.

Above the ground floor, each floor of 21 West Street generally contains two rolled steel windows per bay, with wrap-around windows at the corners, each of these windows having four panes, two on each side. One exception to this is the second floor, which has three windows per bay, also with wrap-around windows at the corners; the second-floor bays are separated by purple and tan brick piers. Below the setbacks on the 21st and 26th floors, the corners facing Morris Street are replaced with a single diagonal chamfered bay.

Having constructed 21 West Street as a speculative development in anticipation of growing demand for office space in lower Manhattan, the building's developers aimed to attract potential tenants through the unique design of the structure. When built, 21 West Street included high-speed elevators and other innovations "to contribute to the comfort and convenience of its tenants". A lobby, 1+1⁄2 stories high, is located on the north side of the ground floor, linking to the two elevator banks. The lobby has a colorful marble mosaic on its floor, depicting the old street grid of lower Manhattan in a style similar to a mariner's map. There are bronze lighting installations near the elevator banks, decorated with waves and shell motifs.

Since its conversion to an apartment building, the interior of 21 West Street has included a terrace on the 34th floor, a play area for children, and a fitness room. The rooms were created from former office spaces; for instance, the play area was previously a locker room.

The construction of 21 West Street occurred when the Financial District was being expanded as a commercial area. The construction of the Interborough Rapid Transit Company's elevated railroad lines, and later the New York City Subway, had spurred the relocation of the area's residential population uptown in the late 19th and early 20th centuries; the tenements that developed at the edges of the Financial District were being demolished and replaced with office buildings.

The building was owned by the 21 West Street Corporation, which had close ties with the maritime industry along the Hudson River. It was developed by civil engineer Alfred Rheinstein. Work began on the structure in 1929, the foundations had been laid by April 1930, and building work was completed in 1931. Real estate agents William A. White & Sons were hired to rent out the space in 21 West Street. After the building's completion, the owners identified tenants in the maritime and shipping industries, including lawyers, transport companies, and import/export companies associated with the sector. In addition, naval architecture firm Gibbs & Cox was headquartered at the building for over 30 years. Other early tenants included the Peruvian consulate in New York City, the Moran Towing and Transportation Company, the Shepard Steamship Company, and the Hedger Transportation Corporation. Around 1950, the main entrance was modified and a heating, ventilation, and air conditioning system was installed.

In 1997, the residential development and management firm, Rose Associates, announced plans to convert 21 West Street into a 293-unit apartment building called Le Rivage. It was to be the firm's first project in 10 years and its first Manhattan project below 8th Street. The building was designated a city landmark by the New York City Landmarks Preservation Commission in 1998, and was listed on the National Park Service's National Register of Historic Places the following year, at which time it was recorded in the register that 21 West Street had been "abandoned for over a decade". When the building was damaged in Hurricane Sandy in 2012, residents' rents were temporarily lowered. The residential units in 21 West Street were partially renovated in 2014.

All content from Kiddle encyclopedia articles (including the article images and facts) can be freely used under Attribution-ShareAlike license, unless stated otherwise. Cite this article:
21 West Street Facts for Kids. Kiddle Encyclopedia.