A.F.C. Wulfrunians is a football club based in Castlecroft, Wolverhampton, England. They are currently members of the Midland League Premier Division and play at the Castlecroft Stadium.

Old Wulfrunians Football Club was established in 1922. They joined the Birmingham Amateur Football Alliance league system. They were Premier Division champions in 1932–33 and again in 1953–54, 1979–80 and 1991–92. After winning the Premier Division title and Senior Cup double for three successive seasons between 2002–03 and 2004–05, the club formed a new team under the name A.F.C. Wulfrunians in order to enter senior football, joining Division Two of the West Midlands (Regional) League, although the club continued playing in the Birmingham AFA under the Old Wulfrunians name.

In 2014 the Midland Alliance merged with the Midland Combination to form the Midland League, with A.F.C. Wulfrunians placed in the Premier Division.

After winning back-to-back Birmingham AFA Premier Division titles in 2013–14 and 2014–15, the club entered another team into Division Two of the West Midlands (Regional) League under the name Old Wulfrunians. They were Division Two runners-up in their first season, earning promotion to Division One. 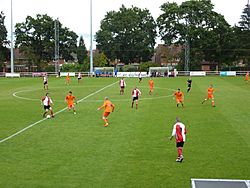 Old Wulfrunians played at the Memorial Ground. However, the ground did not meet the grading required to play in the West Midlands (Regional) League, resulting in A.F.C. Wulfrunians playing at Wolverhampton Casuals' Brinsford Lane ground. After being denied promotion to the Midland Alliance at the end of the 2008–09 season, the club moved to the Castlecroft Stadium at the start of the 2009–10 season, buying the lease from the Rugby Football Union. The stadium was originally built in the 1950s by Wolverhampton Wanderers as a training ground. In the 1990s, it was bought by the RFU to be used as a schools and referees training centre / regional headquarters. AFC Wulfrunians are now leaseholders of the ground after buying the lease from the RFU. Old Wulfrunians play their West Midlands (Regional) League matches at the Memorial Ground after it was upgraded to meet the league's requirements.

In August 2012, it was announced that Wolverhampton Wanderers W.F.C. would be playing home games at Castlecroft Stadium for the 2012–13 season.

All content from Kiddle encyclopedia articles (including the article images and facts) can be freely used under Attribution-ShareAlike license, unless stated otherwise. Cite this article:
A.F.C. Wulfrunians Facts for Kids. Kiddle Encyclopedia.