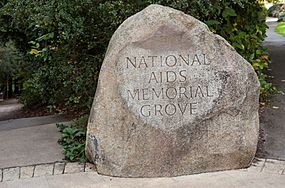 The National AIDS Memorial Grove, or "The Grove," is located at the de Laveaga Dell in eastern Golden Gate Park, in San Francisco, California.

The Grove is a dedicated space and place in the national landscape where the millions of Americans touched directly or indirectly by AIDS can gather to heal, hope, and remember. The mission of the AIDS Memorial Grove is to provide a healing sanctuary and to promote learning and understanding of the human tragedy of the AIDS pandemic.

Congress and the President of the United States approved the “National AIDS Memorial Grove Act” in 1996, which officially set aside the deLaveaga Dell land in Golden Gate Park as the site for the first AIDS memorial in the nation.

The Grove continues through the additional generosity of services and financial support given by numerous individuals, corporations, and foundations. Thousands of community volunteers have ensured over 20 years that continuous gardening and regular maintenance occurs, along with periodic enhancement projects, to keep the landscape vital and sense of place beautiful.

The Grove serves as an important sanctuary for people, from locals to world visitors, a refuge for memories and a place of new enjoyment.

"Most memorials are built after the struggle is over. This battle rages on and we cannot wait, lest any one of our loved ones lost to AIDS be forgotten."

The Grove's former executive director and current board member, Thom Weyand, has said that "part of the beauty of the grove is that as a memorial which receives no federal money, it is blessedly removed from the fight over the controversy of AIDS."

The Main Portal entrance is at 856 Stanyan Street in eastern Golden Gate Park. The West Portal and South Portal are the two other designated entrances, also on park roads surrounding The Grove. Other secondary walkways enter naturally from the park roads and adjacent park areas.

Access to the Grove is open during the park's hours. Free guided tours—excursions are given monthly for the public (except winter).

History of The Grove

"A beautiful grove where people could find solitude and hope while remembering loved ones… a place to provide a positive focus for our grief."

The de Laveaga Dell was created through a gift from the estate of Jose Vicente de Laveaga in 1898. When the Dell was opened to the public on June 21, 1921, it included a lake, meandering stream, beds of irises, over-hanging oaks, and spectacular ferns. John McLaren supervised the development, that also featured rare rhododendrons, lush camellias, and artfully constructed faux boulders.
In the early days, the Dell was known as the Deer Glen and used by the zoo to house animals. In addition, there was a bear housed in the rise at the far western end, now known as the 'Fern Grotto'.
The Dell was well maintained during the first half of the 20th century, but later suffered from a lack of funds for maintenance.

The Committee also raised funds for the AIDS Memorial Grove Endowment — to commence paying for a city gardener position at the Grove, and to support maintenance of the Grove in perpetuity.
This project support configuration of volunteers and an endowment created a model to emulate for public—private partnerships in public spaces.

The AIDS Memorial Grove and the City of San Francisco sign a ninety-nine year lease for the de Laveaga Dell site.

"The Grove represents the spirit of the people who have left and the memories that will always be there." 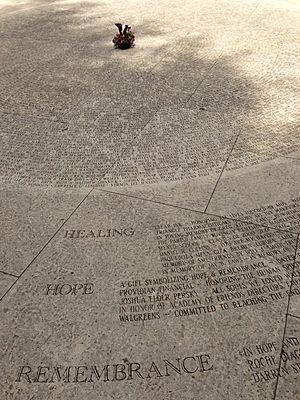 A later inscription expresses the 'Circle of Friends' spirit of place:

“Circle of Friends: Lives Touched By AIDS…Donors to the Grove…Those Who Have Died…Those Who Loved Them.”

National Memorial of the United States 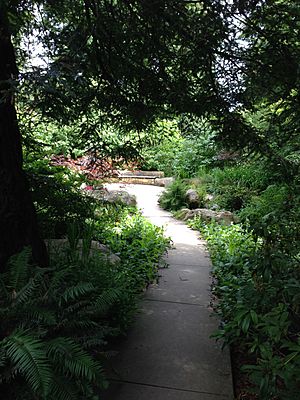 Path to the Circle of Friends

A poem by Thom Gunn is inscribed here:

"dedicated to all of the unidentified individuals who fell victim to AIDS."

The Bruner Award — “seeks to illuminate the complex process of urban place-making, so that it may be strengthened to better reflect the balance between form and use; opportunity and cost; preservation and change.” 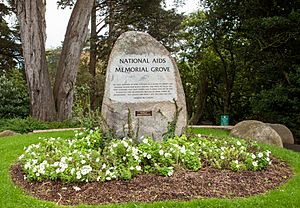 All content from Kiddle encyclopedia articles (including the article images and facts) can be freely used under Attribution-ShareAlike license, unless stated otherwise. Cite this article:
AIDS Memorial Grove Facts for Kids. Kiddle Encyclopedia.