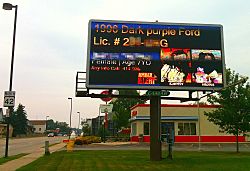 An AMBER Alert on an electronic billboard in Milwaukee, Wisconsin. 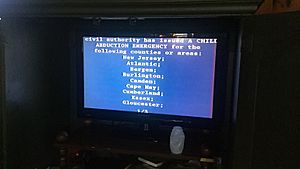 An AMBER Alert is a system that warns people about children who have been kidnapped. It started in the United States in 1996. It was named for Amber Hagerman, a nine-year-old girl who was kidnapped and killed in Arlington, Texas. It is a backronym for America's Missing: Broadcast Emergency Response. Similar systems have been started in other countries, including Canada, Mexico, Australia, and Europe.

AMBER alerts are often shown on electronic message signs on highways. This often causes bad traffic due to drivers stopping to look at the message. They are also shown on television and heard on radio.

All content from Kiddle encyclopedia articles (including the article images and facts) can be freely used under Attribution-ShareAlike license, unless stated otherwise. Cite this article:
AMBER Alert Facts for Kids. Kiddle Encyclopedia.