AS-90 facts for kids

The AS-90 is used by five regiments of the Royal Horse Artillery and Royal Artillery.

AS-90 started in the mid-1980s. It was made on a "gamble" that the SP70 would fail. When this happened, the Ministry of Defence (MoD) asked for a new vehiicle. Four designs were handed in, and AS-90 was the only one that the MoD liked.

The MoD has tried to get the Royal Navy's main ship gun to be able to use the barrel and breech from the AS-90. This would make the gun calibre of the British Army and Royal Navy the same. This would help with ammunition logistics. This would also make it possible for the Army and Navy to help each other develop weapons.

The AS-90 has a special power unit. This is used so that the engine does not have to keep running. This is done to keep the batteries charged while the AS-90 is not moving.

The gun can be started up when it is fully closed down in less than one minute.

The AS-90 has a special computer called the Turret Control Computer (TCC). The TCC controls all main functions of the turret. 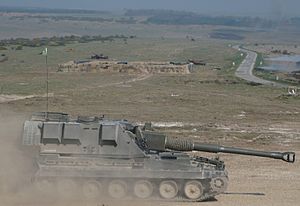 AS-90 on Salisbury Plain

Different kinds of AS-90 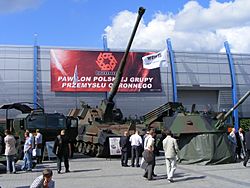 AS-90D - Changed for use in the desert. This model has more cooling for the engine and other machines.

AS-90 "Braveheart" - The AS-90 with the 52 calibre length gun. This project was cancelled.

Haubicoarmata "Krab" - (eng. Howitzer-cannon Crab) A "Braveheart" turret on a Polish chassis. Designed in Poland by Huta Stalowa Wola and WB Electronics. As of 2007[update], two Krab ("Crab") prototypes have been built.

All content from Kiddle encyclopedia articles (including the article images and facts) can be freely used under Attribution-ShareAlike license, unless stated otherwise. Cite this article:
AS-90 Facts for Kids. Kiddle Encyclopedia.