The Armour-Swift-Burlington (ASB) Bridge, also known as the North Kansas City Bridge and the LRC Bridge, is a rail crossing over the Missouri River in Kansas City, Missouri, that formerly handled automobile traffic. 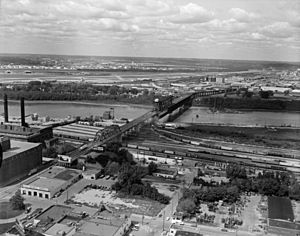 The piers were built in 1890. However, later that year, lack of funding prevented the bridge from being built. In 1909, Waddell & Harrington designed the current bridge and construction started. The bridge is one of two of this type that had car traffic on Route 9 on the upper level, and rail traffic on the lower level. The lower deck could be raised to permit riverboats to pass without interrupting car traffic on top. This design allowed the hangers from the lower deck to go through the truss members of the upper deck. The bridge was built by a combination of Armour Packing Company, Swift & Company, and Chicago, Burlington and Quincy Railroad.

In 1987, the Heart of America Bridge opened to the east to replace the vehicular portion.

In 1996, the remaining part of the ASB was designated by the American Society of Civil Engineers as a National Historic Civil Engineering Landmark. The bridge is now owned by the BNSF Railway. The ASB has a 428-foot (130 m) main span, and makes it the ninth-longest vertical-lift drawbridge in the United States.

December 28, 1911: Bridge opened to traffic, two lanes of automobile on upper level, one track of railroad on lower.

1981–1982: Repair of girder lines on downstream side of railroad deck.

1987: Heart of America Bridge opened to the east, upper auto deck closed to all traffic.

1996: Bridge added as a National Historic Civil Engineering Landmark by the American Society of Civil Engineers, for being only two of that type ever built in the United States.

All content from Kiddle encyclopedia articles (including the article images and facts) can be freely used under Attribution-ShareAlike license, unless stated otherwise. Cite this article:
ASB Bridge Facts for Kids. Kiddle Encyclopedia.