A Hard Day’s Night was a 1964 album by The Beatles, released on 10 July of that year. It was the soundtrack to the movie of the same name, starring the Beatles and directed by Richard Lester. It was their third album. It is said that the title was accidentally said by Ringo Starr during the filming of the movie.

The movie was made because United Artists, a movie company, wanted to sell a soundtrack album. Many movies that included rock and roll were not good movies. The Beatles did not want to star in a movie unless it was well made, with a good plot. United Artists agreed, and a playwright, Alun Owen, was hired.

Alun Owen travelled with the Beatles on a concert tour. He was to write a fictional story at first, based on how the band interacted with other people, but Owen decided the best story to tell was real, based on what he saw. The "grandfather" character (played by Wilfrid Brambell) was added to appeal to older viewers. Brambell was a popular television actor, who starred in Steptoe and Son (a forerunner of Sanford and Son) as a "dirty old" junk dealer.

Even with a script, the Beatles improvised (made up) some of their own dialogue in the movie. They also acted out ideas from the director, Richard Lester.

In the movie's storyline, the Beatles go to London to perform in a television program. Paul's family send along his grandfather, so he and Paul can keep each other company. The grandfather is a "mixer", and likes to cause trouble between people. (He is also noticed often as being "very clean"; a play on Brambell's "dirty" television role.)

The Beatles enjoy breaking rules and expectations, and playing jokes. Their manager Norm and road manager "Shake" try to make things run smoothly, but have a busy time keeping up with both the Beatles and Paul's grandfather, and making sure the television show goes as planned. (Norm and Shake were based loosely on road managers Neil Aspinall and Mal Evans.)

Songs on the album 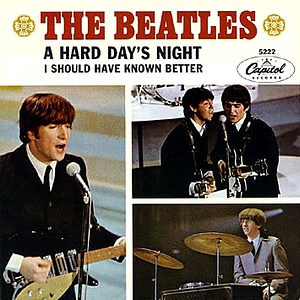 This is the only Beatles album on which all songs are by John Lennon and Paul McCartney, and their first to only have only songs written by the Beatles.

The first seven songs were used in the movie.

All content from Kiddle encyclopedia articles (including the article images and facts) can be freely used under Attribution-ShareAlike license, unless stated otherwise. Cite this article:
A Hard Day's Night Facts for Kids. Kiddle Encyclopedia.