Aaahh!!! Real Monsters is an action-adventure platform game developed by Realtime Associates and published by Viacom New Media in 1995 for the Sega Genesis and SNES based on the American animated series of the same name on Nickelodeon.

Playing as Ickis, Oblina, or Krumm, the player explores various locales collecting specific items and scaring specific people the Gromble instructs the player to. The characters starts out in the sewer, and progresses through levels above in the human world. There are 25 levels and 5 bonus sections. 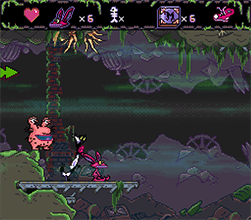 Players can switch between each character at will and each has their own special ability that often can be used to solve puzzles or overcome obstacles: Ickis can fly for a short time, Oblina can reach high ledges, and Krumm can scan off-screen areas. The monsters can also perform team moves, such as stacking on top of one another to reach items normally out of reach. The characters' main weapon is trash, which they can hurl at enemies. Collecting garbage sacks and fish bones gives a limited amount of stronger ammo, triple trash, throwing three pieces of trash at once. Collecting "Monster Manuals" allows them to perform a "scare" which defeats any enemies on screen, spooking them into running for their lives, or takes a certain number of hit points off a boss's health. Each monster's scare is unique: Ickis grows in size; Krumm roars, revealing fangs and three tongues; and Oblina shape-shifts into a far more hideous form. The goal of the game is to finish all levels and find all the items to pass the exam, including defeating a boss target at the end of the final level above ground, with the final boss being, in most cases, the monsters' sworn enemy, Simon the Monster Hunter. Between each level, the Gromble appears next to a projector, showing the name of the next level. Some of the Gromble's actions can be controlled at this point. The game contained small samples of speech at some points, possibly taken from the series. The Gromble speaks at the projector, and the characters speak during their scare, and when hit.

In order to graduate from Monster Academy, three young monsters, Ickis, Oblina, and Krumm, need to pass their Monster Midterm Exam. This test has them scaring a number of people that their headmaster, the Gromble, orders them to in order to pass the exam.

All content from Kiddle encyclopedia articles (including the article images and facts) can be freely used under Attribution-ShareAlike license, unless stated otherwise. Cite this article:
Aaahh!!! Real Monsters (video game) Facts for Kids. Kiddle Encyclopedia.