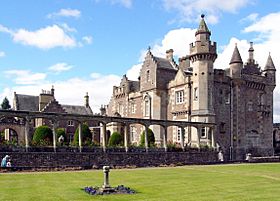 A view of Abbotsford House

Abbotsford House near the town of Melrose in Roxburghshire in Scotland was the house of the writer Sir Walter Scott, where he lived from 1812 to 1832. He wrote a lot of historical adventure stories, many of which have been filmed for the cinema and television.

The house is now a museum dedicated to Scott's life and works. It is a category A listed building.

All content from Kiddle encyclopedia articles (including the article images and facts) can be freely used under Attribution-ShareAlike license, unless stated otherwise. Cite this article:
Abbotsford House Facts for Kids. Kiddle Encyclopedia.