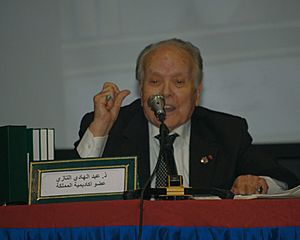 Abdelhadi Tazi (June 15, 1921 – April 2, 2015) was a Moroccan scholar, writer, historian and former Moroccan ambassador in many countries. He has worked with the Nationalist Movement. He has experienced exile and prison during his career.

Tazi was born in Fes, Morocco. He died in Rabat, Morocco, aged 94.

All content from Kiddle encyclopedia articles (including the article images and facts) can be freely used under Attribution-ShareAlike license, unless stated otherwise. Cite this article:
Abdelhadi Tazi Facts for Kids. Kiddle Encyclopedia.