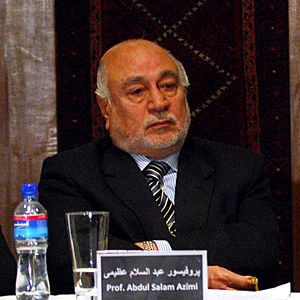 Abdul Salam Azimi (Pashtu:عبدالسلام عظیمی (born: 1936, in Farah Province) is the Chief Justice of Afghanistan. He is the Acting Head of the Afghan Supreme Court. He is considered a moderate and wears western-style clothing including suits and ties. Azimi is a former professor at the University of Nebraska at Omaha in the United States. He is an ethnic Pashtun of the Alizai tribe.

All content from Kiddle encyclopedia articles (including the article images and facts) can be freely used under Attribution-ShareAlike license, unless stated otherwise. Cite this article:
Abdul Salam Azimi Facts for Kids. Kiddle Encyclopedia.