Abraham Ibn Ezra was born in Tudela, one of the oldest and most important Jewish communities in the present-day Spanish province of Navarre. At the time, the town was under the Muslim rule of the emirs of Zaragoza. However, when he later moved to Córdoba, he claimed it to be his place of birth. Ultimately, most scholars agree that his place of birth was Tudela.

Little is known of Ibn Ezra's family from outside sources; however, he wrote of a marriage to a wife that produced five children. While it is believed four died early, the last-born, Isaac, became an influential poet and later convert to Islam in 1140. The conversion of his son was deeply troubling for Ibn Ezra, leading him to pen many poems reacting to the event for years afterward.

Ibn Ezra was a close friend of Judah Halevi, who was some 14 years older. When Ibn Ezra moved to Córdoba as a young man, Halevi followed him. This trend continued when the two began their lives as wanderers in 1137. Halevi died in 1141, but Ibn Ezra continued travelling for three decades, reaching as far as Baghdad. During his travels, he began to compose secular poetry describing the lands through which he was travelling as well as beginning to pen the deeply rational Torah commentaries he would be best remembered for. 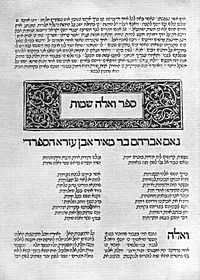 The Book Exodus, with commentary by Abraham ibn Ezra, Naples 1488

In Spain, Ibn Ezra had already gained the reputation of a distinguished poet and thinker. However, apart from his poems, the vast majority of his work was composed after 1140. Written in Hebrew, as opposed to earlier thinkers' use of Judeo-Arabic, these works covering Hebrew grammar, Biblical exegesis, and scientific theory were tinged with the work of Arab scholars he had studied in Spain.

Beginning many of his writings in Italy, Ibn Ezra also worked extensively to translate the works of grammarian and biblical exegetist Judah ben David Hayyuj from their original Judeo-Arabic to Hebrew. Published as early as 1140, these translations became some of the first expositions of Hebrew grammar to be written in Hebrew.

During his time of publishing translations, Ibn Ezra also began to publish his own biblical commentaries. Making use of many of the techniques outlined by Hayyuj, Ibn Ezra would publish his first biblical commentary, a commentary on Kohelet in 1140. He would continue to publish such commentaries over mostly works from Ketuvim and Nevi'im throughout his journey, though he would manage to publish a short commentary over the entire Pentateuch while living in Lucca in 1145. This short commentary would be amended into longer portions beginning in 1155 with the publication of his expanded commentary on Genesis.

Besides his commentaries on the Torah, Ibn Ezra would also publish a multitude of works on science in Hebrew. In doing so, he would continue his mission of spreading the knowledge he had gained in Spain to the Jews throughout the areas he visited and lived. This can be seen particularly in the works he published while living in France. Here, many of the works published can be seen as relating to astrology, and use of the astrolabe.

The crater Abenezra on the Moon was named in honor of Ibn Ezra.

Robert Browning's poem "Rabbi Ben Ezra", beginning "Grow old along with me/The best is yet to be", is derived from a meditation on Ibn Ezra's life and work which appeared in Browning's 1864 Dramatis Personae.

All content from Kiddle encyclopedia articles (including the article images and facts) can be freely used under Attribution-ShareAlike license, unless stated otherwise. Cite this article:
Abraham ibn Ezra Facts for Kids. Kiddle Encyclopedia.