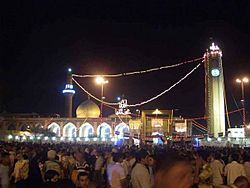 Abū Ḥanīfa al-Nuʿmān b. Thābit b. Zūṭā b. Marzubān (c. September 5, 699 - June 14, 767) was known as Abū Ḥanīfa, or as Imam Abū Ḥanīfa by Sunni Muslims. He was an 8th-century Iraqi Sunni Muslim theologian and jurist.

Abu Hanifa founded the Hanafi school of orthodox Sunni jurisprudence. This is still the most widely practiced law school in the Sunni tradition. He is often spoken of as al-Imām al-aʿẓam ("The Great Imam") and Sirāj al-aʾimma ("The Lamp of the Imams") in Sunni Islam.

All content from Kiddle encyclopedia articles (including the article images and facts) can be freely used under Attribution-ShareAlike license, unless stated otherwise. Cite this article:
Abu Hanifah Facts for Kids. Kiddle Encyclopedia.