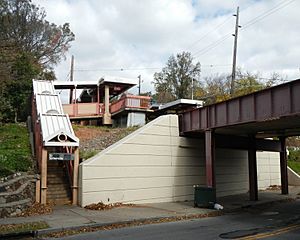 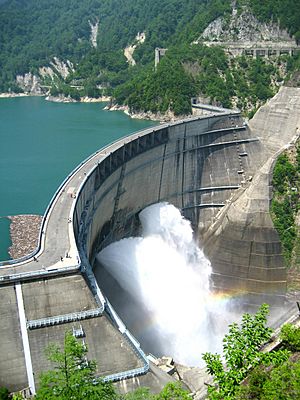 In engineering, abutment refers to the substructure at the ends of a bridge span or dam. This is where the structure's superstructure rests or contacts. Single-span bridges have abutments at each end. These provide vertical and lateral (side to side) support for the bridge. They also act as retaining walls to resist lateral movement of the earthen fill of the bridge approach. Multi-span bridges require piers to support ends of spans that are not supported by abutments. Dam abutments are generally the natural valley walls. They may also be artificial in order to support arch dams such as Kurobe Dam in Japan.

The term may also refer to the structure supporting one side of an arch, or masonry used to resist the lateral forces of a vault. The word derives from the verb "abut", meaning to "touch by means of a mutual border".

All content from Kiddle encyclopedia articles (including the article images and facts) can be freely used under Attribution-ShareAlike license, unless stated otherwise. Cite this article:
Abutment Facts for Kids. Kiddle Encyclopedia.