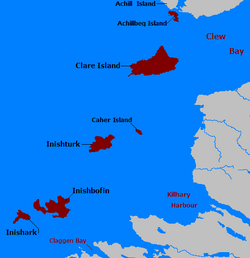 Acaill Bheag (Achillbeg) is a small island in County Mayo, Ireland, just off the southern tip of Achill Island.

Acaill Bheag was evacuated in 1965 and the inhabitants were settled on the main (Achill) island and nearby mainland. The main settlement was in the centre of the island, bounded by two hills to the north and south. There are a small number of holiday homes on the island, but they are usually empty for most of the year. Access to the island is from Cé Mhór, in the village of An Chloich Mhór (Cloghmore), by local arrangement. A lighthouse on Acaill Bheag's southern tip was completed in 1965.

A comprehensive book about the life and times of the island and the people and way of life there, "Achillbeg - The Life of an Island", by Jonathan Beaumont was published in 2005.

The Irish artist Pete Hogan wrote a book about his time spent living on the island in 1983, The Artist on the Island: An Achill Journal which was published in 2013.

The table below reports data on Achillbeg's population taken from Discover the Islands of Ireland (1999) and the Census of Ireland.

All content from Kiddle encyclopedia articles (including the article images and facts) can be freely used under Attribution-ShareAlike license, unless stated otherwise. Cite this article:
Achillbeg Facts for Kids. Kiddle Encyclopedia.