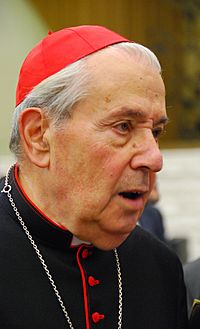 Achille Silvestrini (25 October 1923 – 29 August 2019) was an Italian prelate of the Roman Catholic Church. He served in the Vatican diplomatic corps, either in Rome or abroad, from 1953 to 1990. He was Prefect of the Congregation for the Oriental Churches from 1991 to 2000. He was born in Brisighella, Italy.

Silvestrini was ordained a priest on 13 July 1946 in the cathedral of Faenza by Giuseppe Battaglia, Bishop of Faenza. He earned a doctorate at the University of Bologna in 1948 and a doctorate in canon and civil law at the Pontifical Lateran University.

As of 2016, Silvestrini was chair of the Collegio universitario Fondazione Comunità Domenico Tardini, which was founded in 1946 to support war orphans.

In the 1990s, Silvestrini was mentioned as a successor to Pope John Paul II in the secular press, though Vatican observers noted that his advanced age made his election unlikely.

All content from Kiddle encyclopedia articles (including the article images and facts) can be freely used under Attribution-ShareAlike license, unless stated otherwise. Cite this article:
Achille Silvestrini Facts for Kids. Kiddle Encyclopedia.