Adam Makowicz (born Adam Matyszkowicz; August 18, 1940) is a Polish pianist and composer living in Toronto. He performs jazz and classical piano pieces, as well as his own compositions. 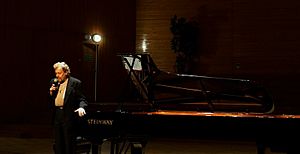 Adam Makowicz was born into a family of ethnic Poles in Hnojník (now in the Czech Republic), in an area annexed by Nazi Germany at the beginning of World War II (see also: Polish minority in Czechoslovakia). After the war, he was raised in Poland. He studied classical music at the Chopin Conservatory of Music in Kraków. Overcoming cultural restrictions under the communist government, he developed a passion for modern jazz. At the time, political freedom and improvisation were disapproved of by the pro-Soviet authorities. Nonetheless, he embarked on a new professional life by switching from the career of a classical pianist to that of a touring jazz pianist. After years of hardship, Makowicz gained a regular gig at a small jazz club in a cellar of a house in Kraków. He was named the "Best jazz pianist" by the readers of Poland's Jazz Forum magazine, and was awarded a gold medal for his contribution to the arts. 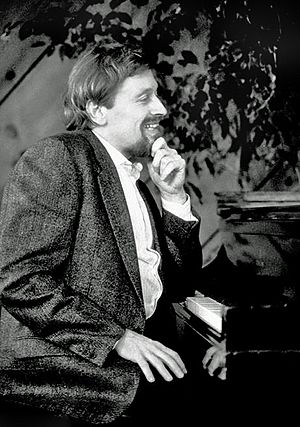 In 1977, Makowicz made a 10-week concert tour of the United States, produced by John Hammond. At that time, he recorded a solo album titled Adam on CBS. In 1978 he settled in New York. Makowicz was banned from Poland during the 1980s after the Polish regime imposed martial law to crush the Solidarity movement. At that time, he took part in Ronald Reagan's initiative called "Let Poland Be Poland", joining many artists and public figures.

During the 2000s, he moved to Toronto, Canada, and continued his career as a concert pianist and recording artist. In the course of his career, Makowicz has performed with major symphony orchestras, such as the National Symphony Orchestra, at Carnegie Hall, at the Kennedy Centre, and other major concert halls in Americas and in Europe. He has recorded over 30 albums of jazz, popular, and classical music, with his own arrangements of pieces by Chopin, Gershwin, Berlin, Kern, Porter, Rodgers, and other composers. Makowicz also wrote and recorded his own compositions for piano.

Makowicz has been building bridges between cultures by his numerous concerts performance and recordings of cross-cultural and cross-style compositions. He performed and recorded music by Chopin and Gershwin with the Warsaw Philharmonic, Moscow Philharmonic Orchestra, National Symphony in Washington, London Royal Philharmonic Orchestra, and other internationally recognized companies. In 1999, in commemoration of 150th anniversary of Chopin's death, Adam Makowicz played his piano tribute to Chopin at the French embassy in Washington. His interpretations of classical pieces by Chopin and Gershwin are marked by finesse, inventiveness, and extraordinary technical virtuosity.

All content from Kiddle encyclopedia articles (including the article images and facts) can be freely used under Attribution-ShareAlike license, unless stated otherwise. Cite this article:
Adam Makowicz Facts for Kids. Kiddle Encyclopedia.