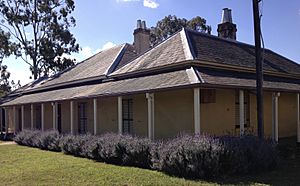 Addington House is a heritage-listed former farm, residence and orchard and now community facility located at 813 Victoria Road, Ryde in the City of Ryde local government area of New South Wales, Australia. It was built from 1794 to 1841 in different stages by James Stewart, James Shepherd, Thomas Bowden. It is also known as New Farm. The property is owned by City of Ryde. It was added to the New South Wales State Heritage Register on 2 April 1999.

The Ryde area was highly suitable for farming and orchards, and early grants to marines were given to encourage agriculture. In 1792 land in the area was granted to 8 marines; two of the grants were in the modern area of Ryde. Isaac Archer and John Colethread each received 32 hectares (80 acres) of land on the site of the present Ryde-Parramatta Golf Links, now in West Ryde. Later in 1792, in the Eastern Farms area, twelve grants, most of them about 12 hectares (30 acres), were made to convicts. Much later these farms were bought by John Macarthur, Gregory Blaxland and the Reverend Samuel Marsden. The district remained an important orchard area throughout the 19th century.

Between 1794 and 1806 emancipated convict James Stewart owned this 12-hectare (30-acre) grant, (the area) named "New Farm" - it was now 1/12 of the original grants made at "Kissing Point" as the area was then known. He built a small three-room cottage of sandstock bricks. In 1798 farmers at Kissing Point registered complaints to Governor Hunter about poor control exercised over the receipt of grain at the public stores in Sydney. One of these farmers was James Stewart. Stewart died in 1806 and the estate was auctioned, including "a good dwelling house" and effects.

James Shepherd owned New Farm's 12 hectares (30 acres) between 1809 and 1933. Shepherd acquired the farm in 1809 for A£70. It is uncertain when Addington was first built. Architectural evidence suggests that the earliest part of the house may date to 1810 and it was first occupied by Isaac Shepherd. In 1810 the property was taken over by Shepherd, who completed the central section by building a six-room sandstone house around the original three-room cottage.

1822 Thomas Bowden, the colony's first professional school teacher, added the west wing and in 1840 the east wing was added. It is of rubble sandstone. In 1820 Thomas Bowden, the colony's second school master, added three rooms and attics in front of the cottage. In 1825 the west wing was added (part has since been demolished) and Bowden started the first Boarding School in the colony here.

Between 1833 and 1876 Isaac Shepherd (son of James) "leased and released" New Farm. Shepherd was noted as being "at Kissing Point, Parramatta" in 1834-36. During the 1860s and 1870s Thomas Kendall Bowden and his wife Mary Elizabeth (née Shepherd) occupied Addington. The western wing of two bedrooms and a verandah were added in about 1832. The first phase of building (Area 1 north and south wings) is attributed to the period 1833-1876. The 1846 mortgage provides evidence which is critical for this interpretation. It is the earliest documentary evidence that relates to standing structures on the site. Also it specifies that after the transaction of 1833 a residence was erected for Isaac Shepherd on the site. Neither archaeological nor architectural evidence can conclusively indicate any earlier date for this construction. The map of 1841 records this first phase of building. Hence on the evidence available it is possible to narrow the dating of this phase to the 1833-41 period.

An 1841 map of Ryde bearing the name James Shepherd on the land originally granted to James Stewart shows an 'L'-shaped house on the site of the existing Addington House. In 1842 Isaac Shepherd and his wife sold part of New Farm, on the south-west of Stewart's original 12-hectare (30-acre) grant, by the road from Sydney to Parramatta. In 1846 New Farm was included in the property listed by Isaac Shepherd for mortgage. One acre of the original 12-hectare (30-acre) grant has already been sold and the "residence of Mr I. Shepherd" has been built on the remaining 12 hectares (29 acres).

In 1850 the east wing (three rooms) was added (one has since been demolished) using old bricks of Stewart's cottage which were so soft that they crumble when touched - these were preserved by a veneer of harder brickwork and numerous coats of paint on the interior. In 1861 another three rooms and attics in front of the original structure were constructed for Thomas and Mary Elizabeth Bowden (née Shepherd). In 1873 the Bowdens built a ballroom and redecorated. In 1875 a Sydney solicitor Thomas Kendall Bowden, son-in-law of Isaac Shepherd, was noted as living at Addington.

Between 1876 and 1896 the farm was left in trust jointly to Isaac Shepherd's son Isaac James Shepherd and his daughter Mary Elizabeth Bowden (née Shepherd), her husband Thomas Kendall Bowden and their children. The Bowdens had the option of becoming the tenants or landlords of Addington. After the 1879 death of Thomas Bowden the property was leased to many tenants. For a short time Addington was home to Sir Henry Parkes, NSW Premier and "Father of Federation". It was later home to the Benson family - well known in the Ryde district.

Other residents include John F. Loxton, a surveyor, who was resident during 1882; A. W. Sutton, a resident during 1889; A. G. Walker, a squatter who occupied Addington during 1891 and 1893; and Thomas K. Bowden, a resident between 1894 and 1895. In 1895 William Henry Flavelle and Alexander Reith Troup and others became trustees of Addington for the creditors of Mary Elizabeth Bowden. Between 1896 and 1908 Addington was owned by Mabel Genevieve Bowden and Florence Edith Bowden (daughters of Mary Elizabeth Bowden). Mabel and Florence had reclaimed ownership for the Bowden family in 1896.

It was occupied by:

In 1909 the property was brought under the provisions of the Real Property Act of 1900, valued at A£1,610 and was rented out. Between 1908 and 1919, the house was owned by Edith Harriette Rogers (house and zero point four zero hectares (one acre) of land). The rest of the land, 12.24 hectares (30.25 acres) was purchased by Edith Harriette Rogers in 1911. Occupied by R. H. Owen 1908 and H. McManamey 1910-11 as above. In 1913 the property was surrendered for consolidation and then subdivision into a number of separate lots. Addington House (1 rod 16.25 perches) became lots 23 and 24 and was rented. 1919 Lots 23 & 24 of Addington estate (Addington: house only) was bought by Sydney Albert Benson. The Benson family were a family of orchardists, well known in the Ryde district. They still owned Addington in 1979. In 1950 Sydney Robert Benson and Norman Christopher Willis became joint tenants and newly-registered owners. In 1952 it was transferred to Lillian Mary Benson.

A private trust was formed with the aim of buying Addington, restoring it for use as a historic home and museum. In 1970 the property was purchased for $25,000 by The Addington Trust.

In 1975 archaeological testing was done to try to confirm the earliest phases of Addington's development. Some documentary evidence suggested that some part of the residence may have commenced as early as 1794. IF found to be the case, Addington would be classified as one of the earliest houses in the colony and the earliest house in the Ryde area. Between 23–24 August a test trench was dug by Maureen Byrne to test how the brick and sandstone structure related to the brick structure. The submerged north wall of Area 4, an uncovered clay packed "feeder" drain leading to an underground water storage tank c. 4 metres (13 ft) distant, a four-sided stone-built drain running between a drip stone at the Area 4's north-eastern corner predating the north and east walls of the stone and brick structure. The foundations in this corner were shown to be random rubble and there was an abuttal between east and north walls.

Another trench was excavated in the southwest corner of Area 1 to test the relationship between the common wall (Areas 4 and 1) and west wall of Area 1. No evidence of a former floor level were found. A third test trench was dug inside the north wing of Area 1 where Areas 1, 2 and 5 converge to test the relationship between foundation stones in the west and south walls of the north wing, thus the phasing of the north and south wings' construction. This confirmed that Area 2 is later than Area 1 (north wing). Inspection of Area 2 pre-excavation revealed a coursed random rubble stone building differing from the building on Area 1 (south wing) in terms of method of construction, materials used and level of the main floor. Thus archaeological evidence gave some additional supportive information for this interpretation of the phasing. 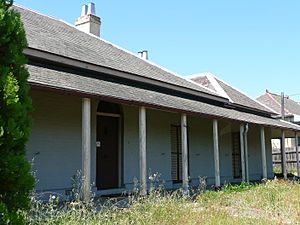 A colonial single-storey sandstone house with a brick wing at the rear and a two room attic. The hip rooves are of slate, the main roof has a rear dormer to the attic with flashing hips over the east and west wings. East wing is of rubble sandstone.

A slate roofed verandah, supported by simple rectangular posts onto stone flags, borders the house on the eastern and southern sides. Colonial shuttered French doors open onto the verandah.

The façade facing Victoria Road is symmetrical with three hipped roof forms; two room attic in the central portion. There is a straight pitched verandah to the east and south supported on simple rectangular timber posts. Roofs are of slate with portions of restored Morewood and Rogers type iron tiles. There is a central front door and four pairs of shuttered French doors opening onto the stone flagged verandah. External joinery and door furniture, including six panel front door and fanlight, are generally intact, but few original internal fittings have survived. There is a stone outbuilding at the rear and a freestanding oven (J Ward) with areas of stone paving and remains of other footings.

As at 13 January 2015, external joinery was mostly intact, stone work on main portion of house appears sound. The house is substantially waterproof. Internally most original fittings have not survived and there is some damp. Floors and ceilings are in fair condition where not replaced.

Archaeological and documentary evidence suggests construction between 1833–41, with further additions until the 1870s. The house was built in at least four separate stages, the brick walled rear wing being one of the earliest sections, pre-1840. c. 1991 attic's rear facing dormer windows replaced.

As at 6 August 2002, an important surviving example of early Australian colonial architecture. It has important historic associations with the Ryde area and the early colony. (National Trust of NSW, 1981 (sic).

Addington is the oldest surviving building in Ryde. It has associations with the early nineteenth century settlement of Ryde and it is a rare and important example in the Ryde area of vernacular farmhouse construction of the 1830s. It has a prominent position on the main road and its architectural character, contrasting with the predominant post World War One suburban development in the vicinity, provides clear evidence of its distinctive history and rarity value. It has archaeological potential and architectural research value.

All content from Kiddle encyclopedia articles (including the article images and facts) can be freely used under Attribution-ShareAlike license, unless stated otherwise. Cite this article:
Addington House Facts for Kids. Kiddle Encyclopedia.