The Addison Gallery of American Art, as a department of Phillips Academy in Andover, Massachusetts, is an academic museum dedicated to collecting American art. The museum's purpose is to acquire, preserve, interpret, and exhibit works of art for the education and enjoyment of local, regional, national and international audiences, including the students, faculty, and community of Phillips Academy, and other students, teachers, scholars and the general public.

Phillips Academy alumnus Thomas Cochran created the Addison Gallery of American Art at Phillips Academy in 1931 as the most extraordinary of his many gifts to the school. Guided by Cochran's goal "to enrich permanently the lives of the students," the Addison's programs demonstrate a central concern for education. The museum is a teaching resource for Phillips Academy students and faculty as well as an art center for the greater Boston area and the nation at large.

By the Terms of Trust under which the Addison Gallery was founded, the museum's collection is limited to works of art or craftsmanship produced by native-born or naturalized citizens of the United States, with the following exceptions: photographs and books by other than native-born or naturalized citizens; portraits or busts of Americans and portrayals of American scenes or vessels by artists of foreign birth produced not later than 1800; pieces of pottery or glassware of whatever origin or date decorated with American scenes; and scale models of famous ships connected with the history of the United States. 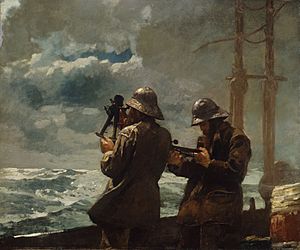 Today, the collection comprises over 17,500 works in all media, including painting, sculpture, photography, drawings, prints, and decorative arts from the eighteenth century to the present. It also has a collection of models of American ships, including the "Half Moon," "Mayflower," and "Yacht America."

A rotating schedule of exhibitions is open to students and the public alike.

The Addison's core programs include: caring for and expanding a permanent collection of American art of the highest quality; producing an ambitious publication and changing exhibition program of twelve to eighteen exhibits each year; offering diverse education and community outreach programs free of charge; and supporting and encouraging living artists through a residency program.

The Addison Gallery has long served as a proving ground for new approaches to learning about art and as a national model for arts education. The Addison strives to be a place where students can learn about art, work with visiting artists and visit diverse exhibitions—all ongoing programs that reflect the museum's central focus on education. The Addison's education outreach program combines the experience of art with its practice; provides direct contact with working artists and presents the arts as a collective expression of culture. Tours, classroom instruction, gallery talks, lectures, teacher workshops, and a film series are offered to area public schools and the general public. More than 6,000 students participate in the education outreach program annually.

The Addison's association with Phillips Academy enables the collection to serve as a laboratory for teaching within the school, not only for studio and art history, but also for history, English, philosophy, and other disciplines. The integration of the museum and its collections with the academic life of the school has had a direct bearing on the emergence of prominent artists/alumni such as Carl Andre, Joseph Cornell, Carroll Dunham, Wendy Ewald, Walker Evans, Hollis Frampton, Peter Halley, Mel Kendrick, John McLaughlin, Samuel Morse, Frank Stella, George Tooker, and Francesca Woodman.

Today the Gallery presents a combination of twelve special exhibitions and permanent collection installations per year, often serving as the only New England venue for nationally touring shows, and represent a wide range of art, across time and media. Recently examples include "American Vanguards: Graham, Davis, Gorky, Dekooning and their circle," (2012), "An American in London: Whistler and the Thames," (2014), "Laurie Simmons: in and Around the House," (2016), and "Mark Tobey: Threading Light," 2017.

In the spring of 2006, the Phillips Academy Board of Trustees approved a $30 million campaign to renovate and expand the Addison Gallery. Construction on the Addison began in the middle of 2008 and was completed in 2010. The project was designed by Centerbrook Architects & Planners.

All content from Kiddle encyclopedia articles (including the article images and facts) can be freely used under Attribution-ShareAlike license, unless stated otherwise. Cite this article:
Addison Gallery of American Art Facts for Kids. Kiddle Encyclopedia.