Adelaide Parklands Terminal, formerly known as the Keswick Terminal, is the only interstate railway station in Adelaide, South Australia. It is 3 kilometres (1.9 mi) from the city centre, adjacent to the suburb of Keswick, and is within the southern part of the West Parklands.

The terminal opened on 18 May 1984 as Keswick Terminal. It was developed by Australian National as a dedicated long-haul passenger station, allowing it to vacate the State Transport Authority's Adelaide station.

In 1986, the Geographic Names Board approved the name Keswick Terminal, and it is now officially classified as a suburb, in the City of West Torrens. The station was included in the sale of Australian National's passenger operations to Great Southern Rail on 1 November 1997.

Adelaide is the only city in the world where passengers can catch trains on three distinct transcontinental routes, The Ghan to Alice Springs and Darwin, and the Indian Pacific to Sydney and Perth, and The Overland to Melbourne. These trains are all operated by Great Southern Rail. 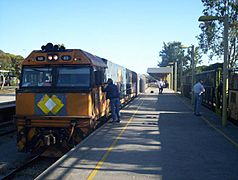 The Indian Pacific at the terminal 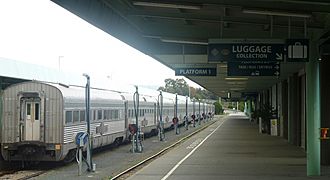 Main platform with carriages from The Ghan

All content from Kiddle encyclopedia articles (including the article images and facts) can be freely used under Attribution-ShareAlike license, unless stated otherwise. Cite this article:
Adelaide Parklands Terminal Facts for Kids. Kiddle Encyclopedia.