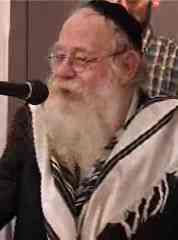 His edition of the Talmud was originally published in modern Hebrew and was translated into English, French, Russian, and Spanish.

Beginning in 1989, Steinsaltz published several writings in Hebrew and English of the Babylonian (Bavli) Talmud in an English-Hebrew edition. and has since been brought to completion.

Steinsaltz was honored with the Israel Prize for Jewish Studies (1988), the President's Medal (2012), and the Yakir Yerushalayim prize (2017).

Steinsaltz died in Jerusalem on August 7, 2020, from acute pneumonia at the age of 83.

All content from Kiddle encyclopedia articles (including the article images and facts) can be freely used under Attribution-ShareAlike license, unless stated otherwise. Cite this article:
Adin Steinsaltz Facts for Kids. Kiddle Encyclopedia.