The Hood monument is a memorial column to Sir Samuel Hood on a hill near Butleigh in the parish of Compton Dundon, Somerset, England. It was completed in 1831 to a design by Henry Goodridge. 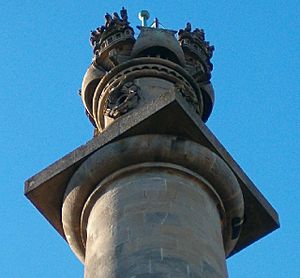 The monument is a 110 feet (33.5 m) Tuscan column on a cuboid ashlar base set on two tall steps, the lower supporting a wrought iron railing enclosure. The proportions of the monument were based on those of Trajan's column in Rome. There was originally a doorway in the base, but this was sealed in 1990. The monument culminates in a band of laurel wreaths beneath a naval crown, composed of the sculpted sterns of four galleons interspersed with four mainsails. It was carved by Gahagan of Bath.

The monument was paid for by public subscription and designed by the architect Henry Goodridge. It was originally linked to the Hood family home at Butleigh by a mile long avenue of cedar trees. The inscription was composed by Sir James Mackintosh.

It has been designated by English Heritage as a grade II* listed building.

All content from Kiddle encyclopedia articles (including the article images and facts) can be freely used under Attribution-ShareAlike license, unless stated otherwise. Cite this article:
Admiral Hood Monument Facts for Kids. Kiddle Encyclopedia.