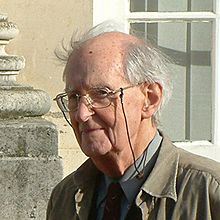 Adriaan Blaauw (April 12 1914—December 1 2010) was a Dutch astronomer. He was an expert on the development of groups of young stars and how they expand away from each other. He discovered that some massive stars, known as runaways, can be moving at speeds of hundreds of kilometers per second. He was the scientific director of the European Southern Observatory and later became it's Director General. From 1976 to 1979 he was the President of the International Astronomical Union.

All content from Kiddle encyclopedia articles (including the article images and facts) can be freely used under Attribution-ShareAlike license, unless stated otherwise. Cite this article:
Adriaan Blaauw Facts for Kids. Kiddle Encyclopedia.