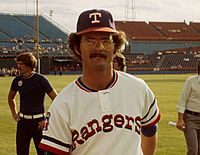 Paul Adrian Devine (December 2, 1951 – June 27, 2020) was an American baseball pitcher. He played seven seasons in Major League Baseball (MLB). He played for for the Atlanta Braves and Texas Rangers from 1973 until 1980. He batted and threw right-handed and was a relief pitcher. He was born in Galveston, Texas.

Devine survived tongue cancer twice. He died from brain and lung cancer on June 27, 2020 at the age of 68.

All content from Kiddle encyclopedia articles (including the article images and facts) can be freely used under Attribution-ShareAlike license, unless stated otherwise. Cite this article:
Adrian Devine Facts for Kids. Kiddle Encyclopedia.