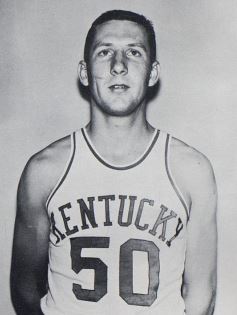 Adrian Howard "Odie" Smith (born October 5, 1936) is an American former professional basketball player. He played as a point guard. He played for the Cincinnati Royals and the San Francisco Warriors of the National Basketball Association (NBA). In 1966, he was chosen for the NBA All-Star Game. Smith was named Most Valuable Player (MVP) of this game after he scored 24 points in 26 minutes. He was part of the U.S. team that won the gold medal at the 1960 Summer Olympics in Rome. He also won the gold medal for the U.S. team at the 1959 Pan American Games.

Smith was born in Farmington, Kentucky. He played college basketball with the Kentucky Wildcats of the University of Kentucky.

All content from Kiddle encyclopedia articles (including the article images and facts) can be freely used under Attribution-ShareAlike license, unless stated otherwise. Cite this article:
Adrian Smith (basketball) Facts for Kids. Kiddle Encyclopedia.