Adriano Celentano ( born 6 January 1938) is an Italian composer, producer, comedian, actor, film director and TV host. He is dubbed "il Molleggiato" (the flexible one) because of his dancing.

Celentano has released many record albums which have enjoyed enormous commercial and critical success.

He is often credited as the author of both the music and lyrics of his songs, although, according to his wife Claudia Mori, sometimes they were written in collaboration with others. Due to his prolific career and great success, both in Italy and the rest of the world, he is considered one of the pillars of Italian music.

Celentano is also recognized for being particularly perceptive of changes in the music business. He is credited for having introduced Rock'n'Roll to Italy – a genre that had great appeal on young people of that time. As an actor, Celentano has appeared in about 40 films, mostly comedies. 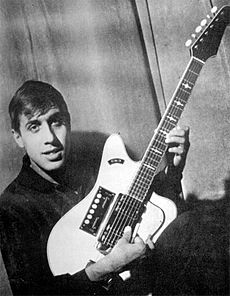 Celentano with an Eko guitar.

Celentano was born in Milan at 14 Via Cristoforo Gluck, and this address later became the subject of the famous song "Il ragazzo della via Gluck" ("The boy from Gluck Street"). His parents were from Foggia, in Apulia, and had moved north for work.

Heavily influenced by Elvis Presley and the 1950s rock and roll scene as well as by American actor Jerry Lewis, Celentano started playing in a rock and roll band with Giorgio Gaber and Enzo Jannacci. With Gaber and Jannacci he was spotted by Jolly Records A&R Executive Ezio Leoni, who signed him to his first recording contract and co-authored with Celentano some of his greatest early hits, including 24.000 Baci, Il Tuo Bacio e’ Come un Rock, and Si e’ Spento il Sole. He first appeared on screen in Ragazzi del Juke-Box, a 1959 Italian musical film directed by Lucio Fulci with music by Ezio Leoni. In 1960, Federico Fellini cast him as a rock and roll singer in his film La Dolce Vita.

In 1962, Celentano founded the Italian record label Clan Celentano (which is still active) with many performers such as Don Backy, Ola & the Janglers, Ricky Gianco, Katty Line, Gino Santercole, Fred Bongusto and his wife Claudia Mori.

As a film director, Celentano frequently cast Ornella Muti, Eleonora Giorgi and his wife Claudia Mori. He and Mori have three children, Rosita, Giacomo and Rosalinda Celentano. Rosalinda is most notable to worldwide audiences for playing Satan in Mel Gibson's The Passion of the Christ. Celentano has also hosted several Italian television shows.

Celentano has retained his popularity in Italy for over 50 years, selling millions of records and appearing in numerous TV shows and movies. As part of his TV and movie work, he created a comic genre, with a characteristic walk and facial expressions. For the most part, his films were commercially successful; indeed, in the 1970s and part of the 1980s, his low-budget movies were top of Italian box office rankings. As an actor, critics point to Serafino (1968), directed by Pietro Germi, as his best performance. 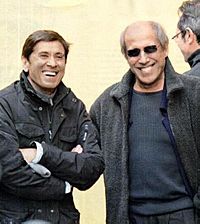 Adriano Celentano in 2009 with Gianni Morandi

He has released forty albums, consisting of twenty-nine studio albums, three live albums, and eight compilations. His most popular songs are "La coppia piu' bella del mondo", which sold over one million copies, and was awarded a gold disc; "Azzurro" (1968), written by Paolo Conte; "Svalutation" (1976), and "Prisencolinensinainciusol" (1972), which was written to mimic the way English sounds to non-English speakers despite being almost entirely nonsense.

Celentano was referenced in the 1979 Ian Dury and the Blockheads song and single, "Reasons to be Cheerful, Part 3", as one of the aforementioned "reasons to be cheerful," and in Fellini's 1986 film Ginger and Fred.

Celentano has been a vegetarian since 2005 and is a strenuous defender of animal rights.

A football fan, Celentano is a well-known Inter Milan supporter.

All content from Kiddle encyclopedia articles (including the article images and facts) can be freely used under Attribution-ShareAlike license, unless stated otherwise. Cite this article:
Adriano Celentano Facts for Kids. Kiddle Encyclopedia.