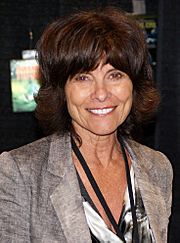 Barbeau was born on June 11, 1945 in Sacramento, California. Her ancestry include Armenian, German, Irish, French, and Canadian. Barbeau was raised in San Jose, California. She studied at Del Mar High School.

Barbeau was married to John Carpenter from 1979 until they divorced in 1984. Then she married Billy Van Zandt in 1992. She had one son with Carpenter and twin sons with Zandt. She now lives in Los Angeles, California.

All content from Kiddle encyclopedia articles (including the article images and facts) can be freely used under Attribution-ShareAlike license, unless stated otherwise. Cite this article:
Adrienne Barbeau Facts for Kids. Kiddle Encyclopedia.