Kids Encyclopedia Facts
This page is about the theme park in Australia. For the amusement park in the United States formerly under the same name, see Six Flags America. 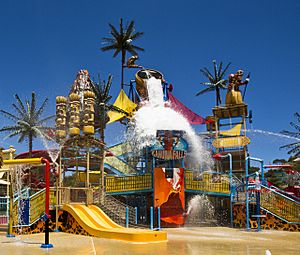 Adventure World is a theme park in Perth, Western Australia. It is located in Bibra Lake, 20 km from the CBD. The park opened on 11 November 1982 as "Adventureworld at Bibra Lakes" and undergoes a winter closure each year.

Adventure World was built on an old limestone quarry at Bibra Lake. 380,000 tonnes of sand were used to reshape the land for the initial landscape of the park before it opened on 11 November 1982.

The theme park has 25 different attractions, including the "Goliath" launched in 2017, the $12 million roller coaster “Abyss” launched in 2013, the $7 million dollar Kraken, which is the longest, tallest and steepest Funnel water slide of its kind, the "Dragon’s Kingdom" children area and Hawaiian themed water playground "Kahuna Falls". Adventure World is a seasonal business open for 7 months a year to take advantage of Western Australia's summer climate. 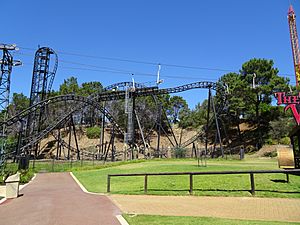 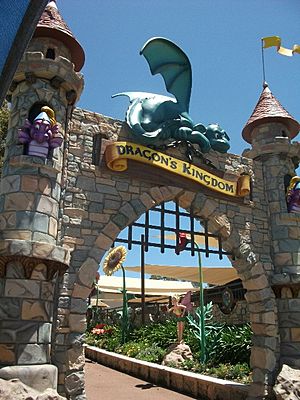 The entrance to Dragon's Kingdom 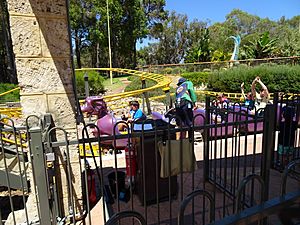 The following is a list of the rides and attractions at Adventure World.

Adventure World announces a new major attraction typically every two seasons, but this is not guaranteed nor a policy, it's more of a coincidence, or loose goal to aim for. More recently new rides are codenamed "MI" (Major Impact) followed by a number (in sequential order). No new attraction is expected for announcement or release in 2019, or the season 2019/2020.

Adventure World has many food outlets. These are:

All content from Kiddle encyclopedia articles (including the article images and facts) can be freely used under Attribution-ShareAlike license, unless stated otherwise. Cite this article:
Adventure World (amusement park) Facts for Kids. Kiddle Encyclopedia.