Aesica (with the modern name of Great Chesters) was a Roman fort, one and a half miles north of the small town of Haltwhistle in Northumberland, England. It was the ninth fort on Hadrian's Wall, between Vercovicium (Housesteads) to the east and Magnis (Carvoran) to the west. Its purpose was to guard the Caw Gap, where the Haltwhistle Burn crosses the Wall. The B6318 Military Road passes about half a mile to the south of the fort.

It is believed that the fort was completed in the year 128 AD. Unlike other wall forts that project beyond the Wall, all of Aesica is south of the Wall. The Wall at this point is narrow gauge, but stands next to foundations that were prepared for the broad wall. There was speculation as to why the foundations for the broad wall had not been used to support the wall at this point. In 1939 it was found that Milecastle 43 had already been built in preparation for the broad wall, and it is thought that it was the presence of this milecastle that prevented the north wall of the fort being built on the original foundations. It appears that the milecastle was demolished once the fort had been completed. The east gate and east wall cannot now be traced.

The fort had only three main gates; south, east and west, with double portals with towers. At some time the west gate was completely blocked up. There were towers at each corner of the fort. The Military Way entered by the east gate and left by the west gate. A branch road from the Stanegate entered by the south gate.

The fort was supplied by water from an aqueduct, which wound six miles (10 km) from the head of the Haltwhistle Burn, north of the Wall. 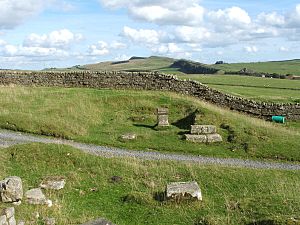 South Gate of Aesica, with a Roman altar at centre behind the path

Excavations were carried out in 1894, during which the ramparts were cleared. The west tower of the south gate was found to contain a hoard of jewellery, which included an enamelled brooch shaped as a hare, a gilded bronze brooch described as a masterpiece of Celtic art, a silver collar with a pendant, a gold ring and a bronze ring with a Gnostic gem. During this excavation the headquarters building (principia) was partially uncovered, together with its vaulted underground strong room. A barrack block was also found to the south-west of the principia.

In 1897 a bathhouse was discovered, 100 yards (91 m) to the south, east of the branch road to the Stanegate. It includes a dressing room, latrine, cold room with cold bath, dry-heat room, warm steamy room and hot steamy room.

All content from Kiddle encyclopedia articles (including the article images and facts) can be freely used under Attribution-ShareAlike license, unless stated otherwise. Cite this article:
Aesica Facts for Kids. Kiddle Encyclopedia.