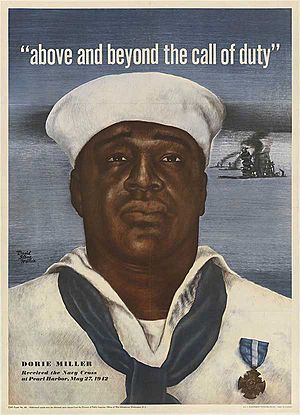 At the beginning of the war, African Americans rarely fought but served the Army in other ways. Some were cooks, others did maintenance work, and some served as nurses. Toward the end of the war, black men were allowed to fight in active campaigns of the war.

The Tuskegee Airmen, the 761st Tank Battalion, and the 452nd Anti-Aircraft Artillery Battalion fought well during the war. The Tuskegee Airmen were the first group of African-American pilots to serve in the military. The 761st Tank Battalion was the first African-American tank unit to fight in the war. The 452nd Anti-Aircraft Artillery Battalion, consisting of fewer than 1,000 soldiers, is credited with bringing down 88 German planes. They fought in nearly every major Allied land campaign during the war.

Doris Miller, a Navy cook, was the first African American recipient of the Navy Cross. He was awarded for his actions during the attack on Pearl Harbor. When the Japanese planes were attacking, Miller ran to an anti-aircraft gun and fired at the Japanese aircraft, even though he had never been taught how to use the weapon.

The first African-American woman to serve in the Navy as a nurse was Phyllis Mae Dailey. She was the first of only four women to serve as a Navy nurse during World War II.

During the Battle of the Bulge in December 1944, General Eisenhower was severely short of replacement troops for the all-white companies. He allowed 2,000 black servicemen to serve in segregated platoons under the command of white lieutenants. The platoons served well. Not one black platoon received a ranking of "poor" by the white officers or soldiers that fought with them. 84% were ranked "very well" and 16% were ranked "fairly well." This was a small, but important step toward the permanent integration of black with white soldiers in the following wars. President Harry S. Truman ordered the desegregation of all U.S. armed forces in July 1948.

All content from Kiddle encyclopedia articles (including the article images and facts) can be freely used under Attribution-ShareAlike license, unless stated otherwise. Cite this article:
African Americans in World War II Facts for Kids. Kiddle Encyclopedia.