The African clawed frog (Xenopus laevis, also known as the xenopus, African clawed toad, African claw-toed frog or the platanna) is a species of African aquatic frog of the family Pipidae. Its name is derived from the three short claws on each hind foot, which it uses to tear apart its food. The word Xenopus means "strange foot" and laevis means "smooth".

The species is found throughout much of Sub-Saharan Africa (Nigeria and Sudan to South Africa), and in isolated, introduced populations in North America, South America, and Europe. All species of the family Pipidae are tongueless, toothless and completely aquatic. They use their hands to shove food in their mouths and down their throats and a hyobranchial pump to draw or suck things in their mouth. Pipidae have powerful legs for swimming and lunging after food. They also use the claws on their feet to tear pieces of large food. They have no external eardrums, but instead subcutaneous cartilaginous disks that serve the same function. They use their sensitive fingers and sense of smell to find food. Pipidae are scavengers and will eat almost anything living, dying, or dead and any type of organic waste.

These frogs are plentiful in ponds and rivers within the south-eastern portion of Sub-Saharan Africa. They are aquatic and are often greenish-grey in color. African clawed frogs are also frequently sold as pets, and sometimes incorrectly misidentified as African dwarf frogs. Albino clawed frogs are common and sold as pets or for laboratories.

They reproduce by fertilizing eggs outside of the female's body. Of the seven amplexus modes (positions in which frogs mate), these frogs are found breeding in inguinal amplexus, where the male clasps the female in front of the female's back legs and squeezes until eggs come out. The male can then fertilizes the eggs.

African clawed frogs are highly adaptable and will lay their eggs whenever conditions allow it. During wet rainy seasons they will travel to other ponds or puddles of water to search for food. During times of drought, the clawed frogs can burrow themselves into the mud, becoming dormant for up to a year.

Xenopus laevis have been known to survive 15 or more years in the wild and 25–30 years in captivity. They shed their skin every season, and eat their own shed skin.

Although lacking a vocal sac, the males make a mating call of alternating long and short trills, by contracting the intrinsic laryngeal muscles. Females also answer vocally, signaling either acceptance (a rapping sound) or rejection (slow ticking) of the male. This frog has smooth slippery skin which is multicolored on its back with blotches of olive gray or brown. The underside is creamy white with a yellow tinge.

Male and female frogs can be easily distinguished through the following differences. Male frogs are small and slim, while females are larger and more rotund. Males have black patches on their hands and arms which aid in grabbing onto females during amplexus. Females have a more pronounced cloaca and have hip-like bulges above their rear legs where their eggs are internally located. 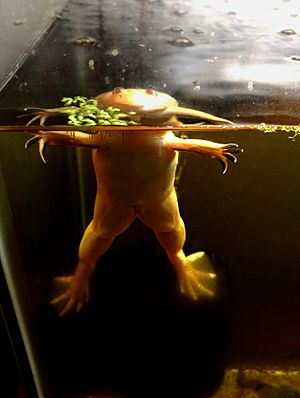 Captive male albino clawed frog in typical floating position with only the eyes and nose sticking out. Note the black hands and forearms used to hold onto the female during amplexus.

Both males and females have a cloaca, which is a chamber through which digestive and urinary wastes pass and through which the reproductive systems also empty. The cloaca empties by way of the vent which in reptiles and amphibians is a single opening for all three systems.

African clawed frogs are fully aquatic and will rarely leave the water except to migrate to new water bodies during droughts or other disturbances. Clawed frogs have powerful legs that help them move quickly both underwater and on land. Feral clawed frogs in South Wales have been found to travel up to 2 km (1.24 mi) between locations. The feet of Xenopus species have three black claws on the last three digits. These claws are used to rip apart food and scratch predators.

Clawed frogs are carnivores and will eat both living and dead prey including fish, tadpoles, crustaceans, annelids, arthropods, and more. Clawed frogs will try to consume anything that is able to fit into their mouths. Being aquatic, clawed frogs use their sense of smell and their lateral line to detect prey rather than eyesight like other frogs. However, clawed frogs can still see using their eyes and will stalk prey or watch predators by sticking their heads out of the water. Clawed frogs will dig through substrate to unearth worms and other food. Their tongue is unable to extend like other frogs, so clawed frogs use their hands to grab food and shovel it into their mouths.

These frogs are particularly cannibalistic; the stomach contents of feral clawed frogs in California have revealed large amounts of the frog's larvae. Clawed frog larvae are filter feeders and collect nutrients from plankton, allowing adult frogs that consume the tadpoles to have access to these nutrients. This allows clawed frogs to survive in areas that have little to no other food sources.

Clawed frogs are nocturnal and most reproductive activity and feeding occurs after dark.

If not feeding, clawed frogs will just sit motionless on top of the substrate or floating at the top with their heads sticking out. 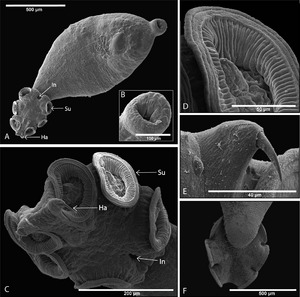 In the wild, Xenopus laevis are native to wetlands, ponds, and lakes across arid/semiarid regions of Sub-Saharan Africa. Xenopus laevis and Xenopus muelleri occur along the western boundary of the Great African Rift. The people of the sub-Saharan are generally very familiar with this frog, and some cultures use it as a source of protein, an aphrodisiac, or as fertility medicine. Two historic outbreaks of priapism have been linked to consumption of frog legs from frogs that ate insects containing cantharidin.

Xenopus laevis in the wild are commonly infected by various parasites, including monogeneans in the urinary bladder.

Xenopus laevis have been kept as pets and research subjects since as early as the 1950s. They are extremely hardy and long lived, having been known to live up to 20 or even 30 years in captivity.

All content from Kiddle encyclopedia articles (including the article images and facts) can be freely used under Attribution-ShareAlike license, unless stated otherwise. Cite this article:
African clawed frog Facts for Kids. Kiddle Encyclopedia.