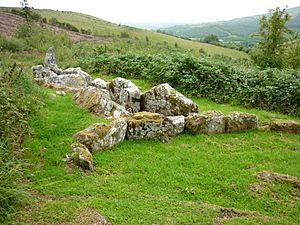 Aghanaglack or Aghnaglack (from Irish Achadh na Glaice, meaning 'field of the hollow'), is a townland in County Fermanagh, Northern Ireland. It is situated in the civil parish of Boho, as well as Fermanagh and Omagh district.

The Reverend John Nixon states in his diary, that during the period of the Plantation, the Chief of the O’Flanagans (Hugh III) whose main residence was at Aghamore on the shore of Carrick Lough, received a grant of land at Glack in Boho. Some of the ruling sept of the O’Flanagans eventually settled in Austria.

In 1938 a "double court tomb" (Grid ref:H0981 4358)was excavated in the townland of Aghanaglack by Prof. Oliver Davies (4000–2000 BC). The tomb is in a clearing in Ballintempo Forest at an altitude of 222 m (728 ft) (Grid ref: H097 435). The twin galleries of the tomb are aligned east-west, one of which has a length of 4 metres, terminating in a 2-metre-tall stone and the other about 1 metre ending in the bedrock. The site was thought to have been disturbed by previous excavations; some of the stones used for building;the actual cairn being used as a pigsty. The tomb was found to contain Bronze Age and Stone Age items, pots, arrowheads and the remains of two children some of which can be found on display at the Enniskillen museum.

The medieval cross shaft (Grid ref: H1083 4351) is approximately 9 ft tall and includes the intact mortice for the cross head. This is a Scheduled Historic Monument.

Main page: Caves of the Tullybrack and Belmore hills

This cave is a provisional Area of Special Scientific Interest and Scheduled Historic Monument because of its use as a Souterrain (grid ref: H1085 4357).

Stone Circle with Cupmark and Cashel

This Mass Rock is located in the sub-townland of Carrickanalter.

All content from Kiddle encyclopedia articles (including the article images and facts) can be freely used under Attribution-ShareAlike license, unless stated otherwise. Cite this article:
Aghanaglack Facts for Kids. Kiddle Encyclopedia.