The subspecific name, conanti, is in honor of the late American herpetologist, Roger Conant.

The color pattern is similar to that of A. p. piscivorus, apart from head markings that are plainly visible even in older, darker specimens: dark brown postocular stripes that are bordered above and below by narrow light lines. A pair of dark stripes are also visible at the front of the lower jaw, as well as a pair of dark vertical stripes at the tip of the snout. Mature specimens often lack any dorsal pattern, while the dorsal patterns of juveniles are more pronounced.

Agkistrodon piscivorus conanti is found in the United States in extreme southern Georgia and throughout Florida. It also inhabits many offshore islands. Intergradation with A. p. piscivorus occurs from southern South Carolina, west across Georgia, through the western part of the Florida panhandle to southeastern Alabama. Not present in the lower keys, despite an old record from Key West. Intergradation with A. p. leucostoma occurs east of Mobile Bay, Alabama, and slightly further east from there. The type locality given is "at the edge of Rochelle-Cross Creek Road, about 7 miles southeast of Gainesville, Alachua County, Florida" [USA]. 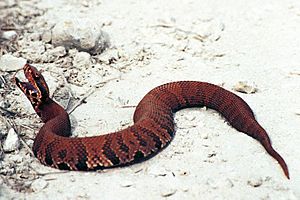 According to Wright and Bishop (1915), in the Okefenokee Swamp A. p. conanti occurs in thickets along the edges of the cypress ponds of the islands, around the wooded edges of stretches of water, in areas where the woods of the islands meet pine woods, and throughout the swamp in general.

In the Everglades, Allen and Swindell (1948) mentioned that it can be found in palmetto clumps as much as a quarter mile from water. Otherwise these snakes tend to aggregate around drying water holes, most likely because of the increasing concentration of available prey. and (1958) described the species as inhabiting aquatic environments, cypress flats and wet prairies, but not pine forests, scrub or hammocks. The latter is contradicted by a report from northern Florida where large numbers were seen in wet pine-palmetto areas, except during very dry periods.

Agkistrodon piscivorus conanti is ovoviviparous, and while there is no specific mating season, most births occur during the summer months. Females generally only breed every other year and give birth to between one and 15 young per litter. The average total length of each newly born snake is 18 cm (7.1 in).

All content from Kiddle encyclopedia articles (including the article images and facts) can be freely used under Attribution-ShareAlike license, unless stated otherwise. Cite this article:
Agkistrodon piscivorus conanti Facts for Kids. Kiddle Encyclopedia.